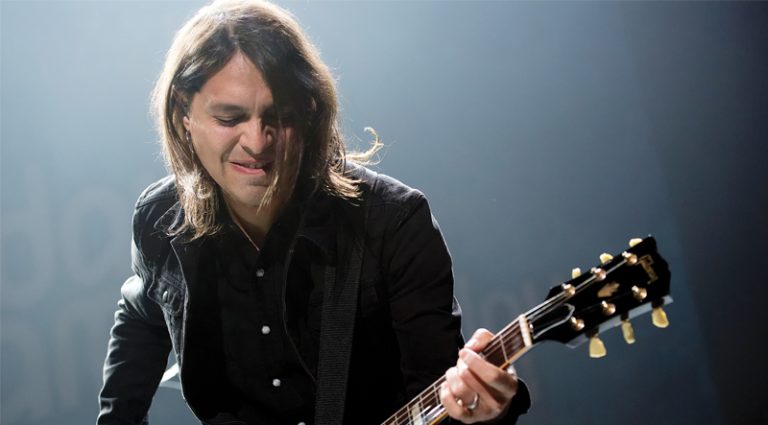 Train guitarist Luis Carlos Maldonado’s musical upbringing and skill on the fretboard has earned him cherry gigs with artists like John Waite, UFO, and Glenn Hughes. He hails from the SG school of melodic-rock swagger, yet it’s his way around a melody that made him invaluable in great bands. He’s a prolific solo artist and professional songsmith. Train’s current album, A Girl, a Bottle, a Boat, is full of memorable pop and his clever guitar hooks.

How did you develop such a wicked legato technique?

My entire family is made up of musicians; three of my four brothers studied classical guitar. We were raised in orchestra from a very early age, studying classical guitar. So, most of it came from there. You have to build these techniques so you can play Villa-Lobos and all that stuff. When you’re doing flamenco, you’re always barring the frets and always moving up and down the fretboard. The muscle memory just stayed there when I started playing pop music. Somehow, when I managed to play rock, it stayed, and I developed my own thing. As much as I wanted to sound like Paul Kossoff, I never did (laughs).

One of the main reasons I play an SG is because of Pete Townshend. I watched him on the Woodstock video, playing with the Hiwatt amps and that crazy fuzz he had going. That was a big influence – like, “Oh my God!” I’ve always loved Angus Young and Tony Iommi, too. My main guitar is a Gibson Custom Shop VOS ’64 reissue with a Vibrola and the stock Burstbucker pickups. I pair them with Hiwatts and Marshalls. They’re pretty awesome.

What was going on in your life before you joined Train?
About 11 years ago I was working with a pop artist on Columbia Records who was opening for Train. She never did sound checks, so I would sing, play Led Zeppelin, and all kinds of oddball stuff. Pat Monahan, the singer from Train came up and said, “Dude! Where did you come from!?” I told him about working with Glenn Hughes, UFO, and John Waite. He said, “Would you like to write?”

We wrote some songs and ended up recording his solo record. Over the years, I stayed with the guys even though I made an album with my band, Into The Presence. If fact, I kept playing with a lot of people including Lisa Marie Presley and Bigelf, which was a big deal. One day, Pat called and asked me to join full-time. I was like, “Cool. Let’s do it.” We stayed friends professionally and personally. Everyone in the group is like a big family. My brother, Hector, plays in the group, so it was a logical step. Pat is really into letting everybody shine. Train is full of great music and inspiration.

How did you graduate from Madison Square Bedroom to becoming a professional guitarist?
I use to do sessions for Mike Varney, at Shrapnel Records. Mike loves discovering new talent – he paved the way for Yngwie Malmsteen, Paul Gilbert, and all those guys. I moved to the Bay Area and my mother said, “Some guy named Mike is looking for you.” I wound up playing guitar for him, doing back-up vocals, and engineering. That’s how I ended up working with UFO and doing a Michael Schenker record. Mike isn’t just a great friend; he’s a mentor in many ways.

I ended up playing keyboard and guitar on a UFO tour with Uli Roth. John Waite was on that tour, and I ended up with him. Everything was very natural and organic when I met Glenn Hughes a few years later. Mike got me to that point with UFO and it just kept going. I wrote with John for eight years and wound up doing an album with Glenn and a bunch of other people. I don’t have many nightmare stories (laughs); 98 percent of my career has been very blessed and I’m glad to be doing it.

Outside of Train, what’s going on with you?
I still write with a lot of people. For me, writing is one of the things I’m blessed to do. When I first got signed, it opened a lot of doors to write with a lot of different artists. I’ll never ignore that. I want to make something that will last regardless of whom I’m working with. I’m in an awesome band with some awesome people, and I get to write with all kinds of people.