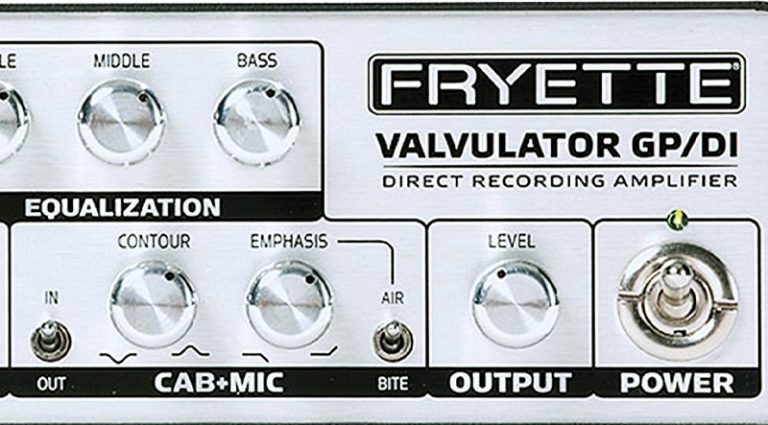 Guitarists are often trying to get more convincing tube tones on their home and studio recordings, but finding authentic valve textures can be elusive without pricey mics and preamps. The Fryette Valvulator GP/DI aims to solve that problem by using real tubes combined with a direct-out circuit and cabinet simulator. It’s also a genuine 1-watt tube amp, ready to drive a small cab for low-volume applications.

In fact, the Valvulator contains no digital circuitry at all, unlike many simulators on the market. Instead, it works like a traditional amp, with three 12AX7 tubes and one 12DW7 (used in Fryette’s proprietary output stage), transformers, and plenty of analog guts. This is significant – as far as digital boxes go, they often lack the depth and organic feel that tubes provide.

On the front, the Valvulator offers a Gain section with Voicing and Saturation controls to determine the amount of overdrive in each stage. A mini switch on the left chooses between Fryette’s amplifier line of clean, Deliverance (old-school British), and Pittbull (saturated crunch). The More switch provides either less overdrive or way more for a hotter tone. A passive three-band EQ is followed by a Master output knob for the 1-watt amp and a Dynamics control to evoke that classic tube “sag” or natural compression (an LED light adjusts its sensitivity to your picking attack). A Deep/Tight switch lets you tweak the low-end frequency of the power amp.

Finally, there’s the Cab+Mic section: the analog direct circuit. An In/Out switch activates the circuit, while Contour and Emphasis (with an Air/Bite switch) give the ability to respectively adjust the cab and mic simulations. The Output section has a knob to control volume heading out to the mixer or digital interface. In the back, look for an 8/16-ohm speaker switch and 1/4″ outputs (speaker and line-level), plus the Direct Out 1 and 2 sections with both 1/4″ and XLR jacks. If your head is spinning by now, don’t worry – the Valvulator can be as simple or complex as you want. 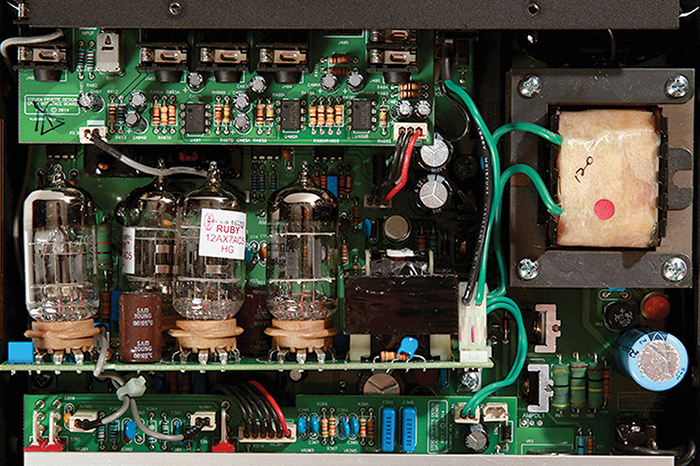 Tested in a home studio, this Fryette performed incredibly well. In short order, guitar sounds ranging from dead clean to wailing overdrive were laid down to several GarageBand tracks on a Mac, and the results were far thicker and richer than your average digital “amp sim.” Beyond its meaty, convincing recording tone, the Valvulator has several other uses, including as a guitar preamp for gigging. Send the output to a mixer and PA and the audience will be surprised you’re getting such a mighty tone from a small tabletop box.

You can also use it to “re-amp” studio guitar parts – that is, taking an already-recorded track and sending the output through a separate amplifier for better tone. If you’re recording direct, but don’t want any amp distortion, run your guitar through the Valvulator for its superior tube circuit. As countless producers and engineers will tell you, a good tube preamp makes just about everything sound better in the studio.

The Fryette Valvulator GP/DI is a formidable tool for both recording and concert use. Sure, it’s not inexpensive, but with a host of uses, bulletproof construction, and genuine tube tone, there’s serious value here. Best of all, like the best tube heads, this small wonder is full of organic sounds that react to whatever you’re playing. Play lighter and the tone cleans up; dig in and it gets good ’n’ nasty. Fryette has distilled decades of tube-amp building into one killer little recording amp.