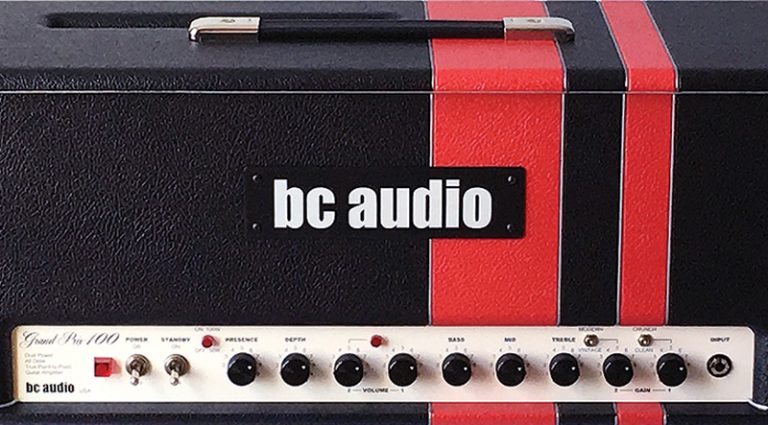 For the past few years, builder Bruce Clement of BC Audio has been getting attention for his killer-sounding and meticulously wired tube heads and matching cabs. New for 2017 is his first two-channel head, the Grand Prix 100.

The amp has an all-tube signal path and point-to-point wiring. Tube-o-philes will further dig the paper-bobbin transformers, zinc-coated steel chassis, and the overall heavy-duty construction, ready for the harshest gigs. There’s also a series effects loop for time-based and modulation stompboxes, including preset Send and Return levels for pedals – just plug ’em in and go. And not only does the Grand Prix 100 have two channels, it has a Dual Power feature that doubles the output from 50 to 100 watts at the tap of a footswitch. Those who play solos, will see the obvious allure.

Inside there are three 6SL7 preamp tubes of an eight-pin “octal” design. Clement likes octals because they’re rugged and behave more like power tubes when they’re pushed. Rather than merely adding distortion, they transition from clean to dirty in a smoother, more organic way.

For output, there are four EL34 tubes, which are the crux of the Dual Power function. When the Grand Prix is in 50-watt mode, two of the EL34s are on. Kick it to 100 watts, and all four spring into action, delivering an extra three dB of output, which is substantial.

On the front, look for tools to shape volume and tone, but perhaps not in a familiar sequence. From Power and Standby on the far left, you move into the power section. Use the Presence and Depth controls to jimmy the tone of the EL34s in the higher and lower frequencies (Depth, for example, can give a thin-sounding guitar more beef or make a smaller cab sound larger). Further right are each channel’s master volumes, followed by a three-band EQ. Finally, at far right, two Gain knobs deliver the preferred clean-to-crunch ratio. Above are two switches: Modern and Vintage for channel 2, and Crunch and Clean for channel 1. There’s also a simple, all-metal footswitch to jump between channels and – most crucially – to flip on those aforementioned EL34s.

Plugged in, the Grand Prix 100 is a serious but absurdly fun amp. There are a lot of power-amp tones inside, specifically that stacked-flavored “thump” that can make the hair on your arms tingle. Better still, there’s everything from pure clean to California crunch in here, plus all the classic British amplification one could ask for. On the heavier side, channel 1 delivers authentic Angus and Keith overdrive, while channel 2 takes you well into Eddie and Kirk saturation – and then some.

You can certainly introduce an overdrive pedal if you like, but really, the Grand Prix doesn’t require any external help in the gain department. It will cover any gig imaginable. And the 50/100-watt function works great at all volume levels. You can even use 100 watts at lower volumes for super-crunchy sounds that won’t wake the neighbors. (Keep in mind that the amp defaults to 100 watts when the footswitch is unplugged.)

The Grand Prix 100 joins the rest of BC Audio’s line as a tour de force design. Sure, it’s priced on the higher end, but this is a hand-wired, premium tube head. Tone this sumptuous is worth every penny.