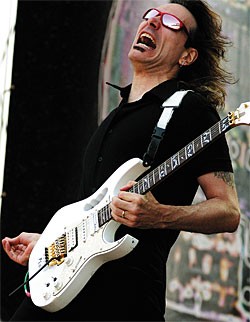 Considered one of the most talented musicians on the planet, Steve Vai constantly strives to better himself as a player and musician. He enjoys experimenting with different sounds, instruments, and musical styles, always searching for ways to raise the bar and introduce something unique.

VG spoke with Vai about creating the compositions for his latest release, Real Illusions: Reflections (Epic), explaining how they were realized from ideas to the actual tracks. Without further ado, here’s a bit of insight into the eclectic mind of Mr. Vai.

Vintage Guitar: How were the songs conceived for Real Illusions?
Steve Vai: My last studio record, The Ultra Zone, was five or six years ago. Since then, I released a lot of material, but none of it as focused. I originally wanted to recreate a musical that had all these characters and a story, and it became such a robust story line and concept that I decided to spread it out over several records. So this is basically the first installment of a series of two or three, depending on how things unfold, that expands the story and the concept of the music.

That aside, because a lot of people may not be interested in digging that deep, there’s just the music. And with the music, I bring the things I enjoy. I’ve been doing this for 25 years, and you come to a point where you’ve got to pick a lane and drive. I’ve had all the success you can have, as far as playing in big rock bands, and there have always been times when I felt I needed to create something acceptable or accessible, and deliver what people wanted. But you just get bored of doing that because you’re undermining yourself, and not really giving them what they want. I’m talking about the people who are “in the club,” that get a particular artist. You’re not giving them what they want unless you’re giving them what you want. So I decided it’s time to make a record and be as expressive as possible. And I do that by incorporating things like a story or by listening to that little inner voice that tells me what the melody should be and the chords.

When it comes to playing the guitar, I make conscious efforts to try to introduce something a little unique and special to each song or to each performance. The guitar is boundless in its potential. Its only limited by your imagination, so that’s what makes it such a glorious challenge to play. You can be as expressive as you can, and still, there’s just a plethora of elements you can apply to express yourself. So I made a conscious decision to pick up the instrument every day and try to come up with one thing that’s new. That’s what builds your musical vocabulary – coming up with a concept or an idea, even if it’s just three notes that have a particular bend to them, or an entire solo, or new technique or approach. The next thing you know, you’ve created an aura, or a catalog of riffs, songs, and techniques that are really you. It’s one way to explore your own uniqueness. On every song on this record, I tried to introduce something like that.

What are some good examples?
For instance, on the opening song, “Building The Church,” there are these wild hammers going on through the intro and the middle section. It’s a very difficult technique and I’m not just satisfied with doing something that’s flashy and just technique-oriented. If you listen to those hammers and break them down, and listen to the notes and how they affect the track with their harmonic structure, there’s a lot more to them than just a funny, fast technique. 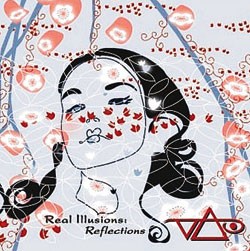 On “Dying For Your Love,”the whole chord concept is very rich, and the melody in the beginning is all about phrasing. Phrasing is one thing the guitar offers that’s so unique to itself. It’s different from a piano because the dynamics are so much more exaggerated. And with the use of effects, it’s a tool for really deep expression. Then there are songs like “Yai Yai,” which is this bizarre little tidbit where I created a piece of music around an effect. I built a patch in the Eventide DSP4000 that’s basically a modulating filter program. As you hit a note, it takes the frequencies and it modulates them so it sounds like the note is going “yai, yai, yai.” I just played a melody around it.

For “Under It All,” I wanted to use the seven-string, but didn’t want to pick it up and go “daga-daga-daga-daga.” How often has that been done, and done very well? So I challenged myself to do something different. The seven-string can create chord voicings that the conventional six-string can’t. I heard the rhythm guitars for “Under It All” in my head, which is a very thick, rich, tensiony cluster of chords banged together, and the way that I produced the guitar parts, those notes actually speak, so you hear all the notes in the chord with all that distortion and those low strings.

What was your setup in the studio?
I mostly used my Carvin Legacy amps. I usually use a stereo setup with a head and two 4x12s, but you have to let the song dictate. I also used a Strat through an older Fender Professional tube amp. But there are some tracks where I ganged a lot of amps together. You’ve got to do that very carefully when mic’ing and amping things, especially if you’re mixing them with dirty DI sounds because you’ll lose everything in phase cancellation. For “Under It All,” to get those notes to speak like that, I used two guitars through about 10 different amplifiers.

I used my main Jem guitars, Evo and Flo. Flo has the Sustainer pickup. Another Jem I used was a floral model with a Roland guitar synth pickup to trigger MIDI information. I also used a plethora of other stringed instruments, including the Jerry Jones Coral Sitar which you can hear on “Freak Show Excess,” a new acoustic that I designed for Ibanez called the Euphoria, and a seven-string acoustic made for me by Emerald Guitars in Ireland. The entire guitar is one piece of carbon-fiber and has this unique sound. When you amplify it and put a mic on it, you get this nice balance between electric and acoustic atmospheres. Then I used a saz and an oud, which are these Turkish instruments. I also used my ’77 Fender Strat on a couple of things like “Firewall.”

For effects, I used the Eventide DSP4000 and T.C. Electronic G-Force – my main workhorse. On the floor, I had my Morley Bad Horsie wah and Little Alligator volume pedal. I usually use a Boss DS-1 for distortion, but occasionally, I use a new TS-9 Tube Screamer reissue. I also used a Sobbat phaser/flanger box on “K’m-Pee-Du-Wee.”

What was the greatest challenge you faced in making this album?
There are always time constraints, but my big challenge is this: Most of the time, I conceive a piece of music in my mind before I even touch an instrument. Then I go about realizing it. Sometimes I get overwhelmed with these intuitional flashes of music. An entire concept or an entire idea for a piece of music will just come to me like that. For instance, “Dying For Your Love” and “Freak Show Excess” were just there in a moment. But making it real is unbelievable work, and many times, it’s not fun because I never compromise on any of this stuff. Everything is exactly the way that I wanted it.


This article originally appeared in VG‘s June ’05 issue. All copyrights are by the author and Vintage Guitar magazine. Unauthorized replication or use is strictly prohibited.