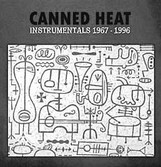 The L.A.-based band was formed in 1966 by a core of blues scholars and 78 collectors whose self-titled 1967 debut revealed them as reverent but capable interpreters, injecting life into blues standards. Boogie With Canned Heat, from the following year, pushed the envelope a bit more, producing the hit “On The Road Again,” with Al Wilson’s haunting falsetto vocal, and introducing “Fried Hockey Boogie,” with everyone soloing over a John Lee Hooker boogie rhythm.

By that time, Fito de la Parra, who remains the band’s leader to this day, had replaced original drummer Frank Cook – forming a killer rhythm section with bassist Larry Taylor, pumping behind Wilson, guitarist Henry Vestine, and ringmaster Bob “The Bear” Hite. But, with notable exceptions, the band’s command and charisma was rarely captured on record. Oddly enough, 1968’s Living With The Blues probably represented the band most accurately – at their most experimental in the studio and live onstage, with an extended “Refried Boogie” engulfing two sides of the double album.

Instrumentals opens with “Parthenogenesis,” a 20-minute songs cycle from that album – a definite timepiece of the era, but one that still holds up today. Wilson’s solo Jew’s harp segues into a tapestry of overdubbed harmonicas, then Hite belts some blues over John Mayall’s barrelhouse piano before Fito becomes a modern-day, one-man African drum corps, followed by Vestine’s turn, with five overdubbed fuzz guitars, more harmonica from Al, a great tribute to Albert Collins by Henry, and more Jew’s harp at the fade.

The band, who helped bring Collins out of obscurity and get a major label contract with Liberty, pays tribute to the Master Of The Telecaster again with “Hill Stomp” – Hill being Joel Scott Hill, who reprises “Caterpillar Crawl,” his 1959 instro hit with the Strangers. Taylor and Vestine trade instruments (quite impressively) for the slow blues “Down In The Gutter But Free,” and de la Parra shows some jazzy Latin chops on “Mi Huautla.”

The program jumps from 1972 to 1990 more seamlessly than one would expect, and we find the great Junior Watson front and center for a swinging live recording of his tour de force, “The Hucklebuck,” with just the right mix of reverb and distortion.

With the exception of 1996’s “Gorgo Boogie,” a fuzzy duet between Fito and guitarist Robert Lucas, Watson is at the helm for the remainder of the CD, paying tribute to Guitar Gable with the Louisiana syncopations of “Mambo Tango” (essentially “Congo Mambo”) and to Pee Wee Crayton on the blues master’s classic “Blues After Hours.”

Despite the instrumental theme, this is one of the most representative sets of this great blues institution.

This article originally appeared in VG’s Feb. ’07 issue. All copyrights are by the author and Vintage Guitar magazine. Unauthorized replication or use is strictly prohibited.