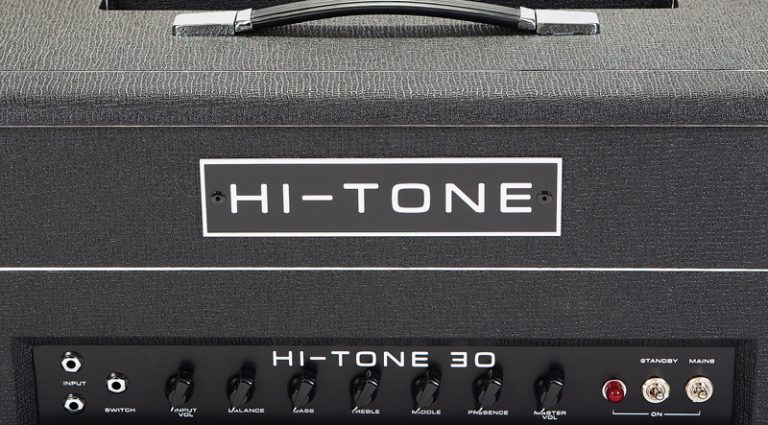 While many have tried via transistor trickery to replicate the tone of Jimmy Page’s Hiwatt at Led Zeppelin’s legendary January ’70 Royal Albert Hall performance, the Hi-Tone HT30/JP 15 is the most authentic reproduction yet, with a few welcome updates.

Commonly referred to as the JP-30, this Hi-Tone is a 30-watt, all-tube head. The review model had a footswitch to reduce headroom and increase gain via the Balance control, as well as Variable Voltage Reduction that makes the amp easier to use in situations requiring less volume and more grit. The JP-30 was tested with Hi-Tone’s 2×12 cabinet with DR-F speakers.

The JP-30 is not unlike other Hi-Tones in that it has more clean headroom than a good number of amps on the market. Clean, it offers that classic clang and a wide, clear midrange along with deep low-end and snappy, responsive highs that glue themselves to your dynamics.

On the gainier side (with cranked Input Volume and Balance controls), it’s still classic, with a more AC30-ish high-end saturation. Low-end is massive, midrange still wide and clear, which creates a beautiful, huge distorted tone that makes even weaker single-coils sound girthy and wide.

The character of the gain changes subtly with the guitar used. With a Strat or a Tele it focuses toward the high end; with a Les Paul, the midrange opens up and the tone becomes more buttery. With a P90-equipped semi-hollow, the gain was toppier, with more “air” in the mids.

But this is not a “hide behind the gain” amp – it’s incredibly responsive and transparent, revealing every nuance of your playing. It also works seamlessly with boosters and overdrives, melding the characters of amp, guitar, and pedal into one gloriously loud formula.