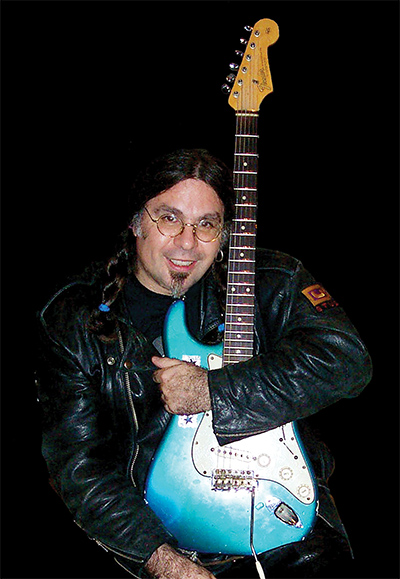 One of the hottest guitarists to emerge from the mid-’70s fusion scene was Ray Gomez, who first became known through his virtuosic performance on Stanley Clarke’s landmark School Days album. We talked with Ray as he was preparing to release his new album, Honor.

One of the hallmarks of your signature sound is your whammy-bar technique, which you often play with your pinky, while you’ve seam lessly incorporated it into your playing. How did you develop that?
I’ve been using the bar since ’68/’69, when I got my first Strat, and the guy that inspired me to do that was Jimi, particularly his playing on the Band of Gypsies album. Even though some of what he plays isn’t even notes – it’s like a howling that suggests melodies. And so it went on from there. I did a lot of that harmonics/whammy melodies on “West Side Boogie” before Jeff Beck, back in ’79. I mean real melodies, not just one or two notes, but up to seven notes!

Speaking of Jeff, your tune “Sweet Life” recalls his tune 1998 “Brush with the Blues.” Didn’t your song come out first?
“Sweet Life” came out way before Beck’s tune, but it was only released to music-biz people as a demo. That same version is out and available as “Sweet Life 1991,” because I was shocked at how similar it is to “Brush”… I was disturbed, honestly. “Sweet Life” first went to Epic, Jeff’s label, in ’91. Joe Bonamassa, who played it live and wanted to record it, swore that Jeff had to have heard it!

Your use of dynamics is another aspect of your playing that gives it some excitement. Were there any players that inspired this?
I listen to players that know how to express and communicate emotions, whether it’s the blues guys like B.B., Albert, and Freddie King, Albert Collins, or Eric, Carlos, Peter Green, and Jeff. I would listen to all those guys, hear the emotions they would communicate, then start to figure out what they were doing. The good thing about studying technique is that once you get it down, it’s available for you to use anytime to express yourself.

You were Stanley Clarke’s go-to guitarist at the height of his fame. What do you recall most about those early days of fusion?
What happened was that Cream broke up and Hendrix died; at the end of the ’60s, we were like, “What’s gonna happen now, who’s gonna lead us?” So along came John McLaughlin, and he was making a statement and taking things somewhere else. Then came Spectrum and Return to Forever, and out of RTF came Stanley and (drummer) Lenny White. These became the new heroes, and I wanted to play with Stanley and Lenny. I played my ass off on Lenny’s album, then I called Stanley and asked who he had in mind for his new album. He said, “McLaughlin, Beck, Benson,” and there I was, a new cat on the scene, thinking that I didn’t stand a chance. So, after being in America for less than a year, I was getting called to play on albums by two of the baddest mother*****s on the planet, at the same time! They were the gods of fusion!  We did School Days and it was great – all of it in one or two takes, straight up and live. The record went gold and I started touring with him and ended up turning down a record deal with Atlantic, which I should have taken.

You’re closely associated with the Fender Stratocaster and a Marshall amp. Do you have any particular favorites?
I used to have a lot of old original Strats, and still love old Strats. But, all I care about on guitars are the neck and the pickups. As far as amps for gigs and recording, I have some old Marshalls, mostly Super Leads, but sometimes I use a 50-watt 2204. That said, nothing beats the sound of a 100-watter. For small amps, I also use a THC Univalve, which is a midrange monster.