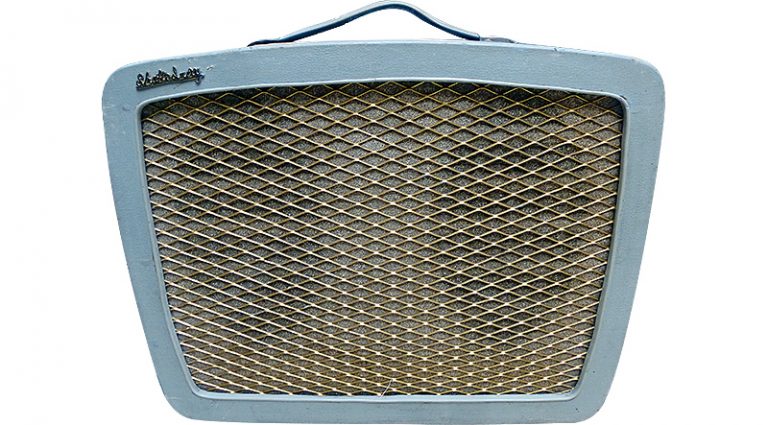 We mine the rich seam of obscure vintage American tube amps on a regular basis here in the pages of VG, but less often do we delve into the equally fascinating histories of B- and C-list British guitar amps of the 1950s, ’60s, and early ’70s. Nevertheless, there was plenty of life in the British amp industry before Vox and Marshall hit the scene, and some significant work was also done by alternative manufactures after they’d begun to dominate the U.K. market, too, and a boatload of trenchant backstory to go with it. Some amps came from short-lived competitors or catalog-grade jobbers, but the Dallas Shaftesbury 30 was the product – albeit a surprisingly rare one – of what was then one of the most significant names in the British musical instrument industry.

Founded as John E. Dallas and Son in 1875 and known as Dallas Music Ltd. by the late 1950s, the company manufactured and distributed a range of instruments and accessories from its headquarters in Clifton Street, London. Guitarists would eventually (and forever after) know the company first and foremost for two legendary creations – the Rangemaster Treble Booster and Fuzz Face pedal (badged Dallas-Arbiter after 1967, following Dallas’s purchase of Arbiter Electronics in ’65). Around 1959, though, Dallas was addressing the guitar craze by manufacturing and selling a small range of combo amps under its own name. This was a world in which upstart Vox was just beginning to populate the backline of The Shadows and other British beat groups, and Marshall amps were not yet a glimmer in the eye of a music shop proprietor of the same name. It was a world of Watkins, Selmer, and Elpico, and Dallas clearly intended to be a player. In addition to a selection of smaller “student” amps, Dallas offered a Deluxe 75 similar to this Shaftesbury 30, and a mid-sized/12-watt Rangemaster combo. 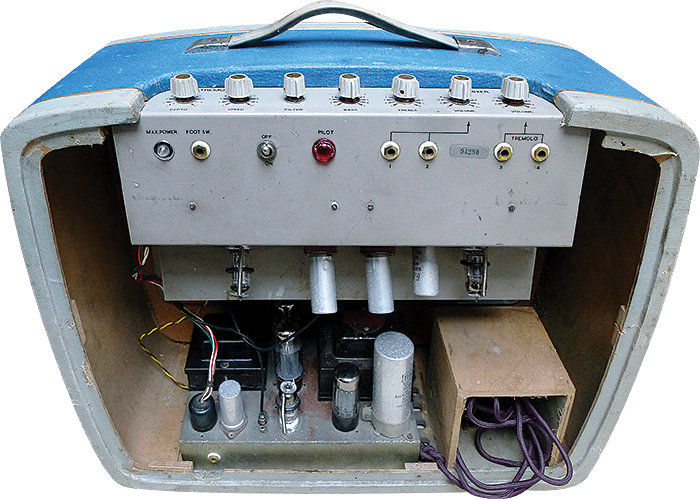 Like many others of its day, the Dallas Shaftesbury 30 is a quirky design that dives in looks-first, with a solid yet workmanlike effort within, deriving elements from commonly available amplification circuits of the era, and looking, therefore, not a lot unlike what its contemporaries were putting out at the time. In addition to dual channels with tremolo on one and shared Treble and Bass controls, the circuit did show some creativity in the inclusion of a Filter knob, a rotary switch that attenuated the amp’s low-end response by engaging a network in the amp’s negative-feedback loop. Like some Selmer amps of the era, as well as the fledgling Vox models, each of the Shaftesbury’s two channels within the tag-board-wired upper chassis was kicked off by an EF86 pentode preamp tube. The shared tone stack was sandwiched between the two triode stages of an ECC83 (a.k.a. 12AX7). Down in the more decidedly point-to-point-rendered lower chassis, another ECC83 acted as output driver and split-phase inverter, feeding a pair of cathode-biased EL34s. Rectification came courtesy of a GZ34 tube. The whole thing powered a pair of elliptical EMI-branded speakers (hey, who knew that the best guitar speakers would prove to be round?). Given the output configuration, and B+ voltage levels that delivered something in the lower-/mid-300 volts DC to the plates of the output tubes, the Shaftesbury 30 probably struggled to yield its stated wattage, and was therefore significantly less powerful than other famous fixed-bias/dual-EL34 British amps that would proliferate in years to come.

This particular Shaftesbury is owned by Julian Marsh of Nottingham, England, who has made a practice of hunting down several Dallas amps (he also owns a Deluxe 75 that is extremely similar to the Shaftesbury, apart from swapping one elliptical speaker for a standard round Celestion G12).

“I have often wondered why Dallas amps don’t have the same recognition as some of the other ’60s British makes,” Marsh told VG. One answer to that, of course, might be their extreme rarity. “I suspect this is because they were produced in very small numbers due to the expense of making the cabinets with their steamed-ply construction that give the whacky curved-corner ’50s shape.

“Certainly, there is nothing else like them in terms of appearance, except maybe the little 10-watt Elpico AC55, and they certainly turn heads when part of a backline.”

Whatever the reason, Dallas amps – and the larger models in particular – are indeed thin on the ground. Promotional literature is scant, too, restricted mainly to hand-sketched monotone catalog entries that list the basic features of the extremely similar Shaftesbury 30 and Deluxe 75 and bill them at 65 and 75 guineas each (roughly £65 to £75, or $105 to $120). In any case, Dallas amps were manufactured from 1959/’60 to circa ’65, when the transition to Dallas-Arbiter gave the newly expanded company a more-solid footing in the electronics business, and a new peg on which to hang its valve-fired cloak – Sound City. 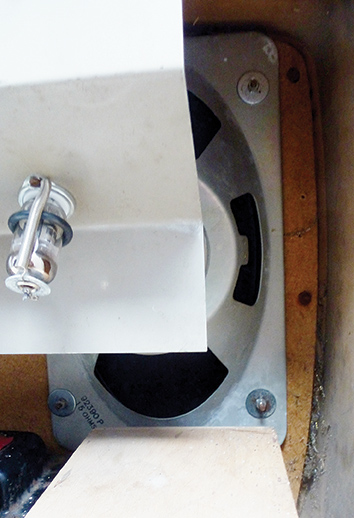 Named after one of three music shops in Arbiter’s London-based Empire (the location on Rupert Street in Soho), the new brand quickly became far more prolific than Dallas had ever been, and rendered these interesting early combos a mere footnote in British guitar-amp history.

There’s something about the two-tone, powder-blue-and-light-grey Rexine covering and funky ’50s-TV-set aesthetics that implies this would be a chimey, jangley, “somewhat twee yet nevertheless delightful” sounding combo. Think again.

It might do that at lower volumes when bidden, but as Marsh further relates, “The great thing about the amp is its versatility. If I drive it hard with my Les Paul, I get the Clapton Bluesbreakers Beano sound, but at slightly less volume. If I use the tone filter to cut the bass, it gets the Peter Green out-of-phase sound, or with an ES-335, the B.B. King sound. It’s definitely a blues amp!”