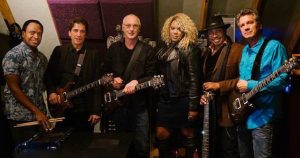 Along with original songs, the disc includes renditions of Jimi Hendrix’s “Freedom” and “Machine Gun” along with the Mother’s Finest track “Truth’ll Will Set You Free.”

The band will celebrate the release with performances at the Iridium, in New York City, on February 9, and at the World Cafe Live, Philadelphia, on February 10. Read more at prsband.com.