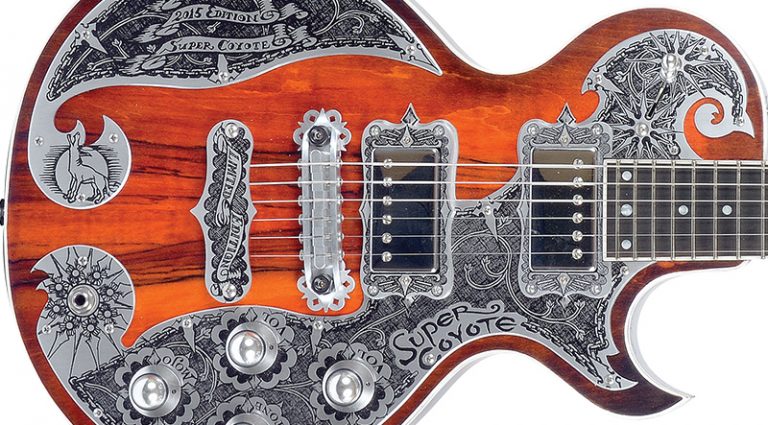 Teije Wijnterp has been around. Born in the Netherlands, he studied flamenco guitar in Spain before relocating to Austin and eventually joining Joe Ely’s band.

Through his years as a pro musician, Teye (as he is commonly known) kept a running “bitch list” of problems that frustrated him with guitars he could buy. When it grew too long, he decided the time was nigh to build himself a guitar to right those wrongs. Friends tried it out and wanted one of their own. Next thing he knew, Teye was a guitar builder.

Back in the day, Teye became friends with legendary British maker Tony Zemaitis, commissioned a couple guitar builds, and today remains inspired by Zemaitis’ work. Yet while Zemaitis guitars are oh-so-English in style, Teye’s adornments lean on his fascination with flamenco and Andalucia, the Moorish region of Spain.

The Super Coyote obviously mimics the shape of a Zemaitis-style Les Paul. It’s adorned with acid-engraved aluminum plates to Teye’s design (he also offers opulent hand-engraved custom models, pearl inlays, exotic woods, numerous finishes, and aging). The body and neck are mahogany with a maple cap, and while the result isn’t light, any back pain is made up for in tone.

Now, about that tone. Plugged into a new Supro Thunderbolt and inspired by the Super Coyote’s Keef vibe, we dimed the separate pickup Volume and master Tone controls. The tone was gloriously clear, with a suitably in-your-face attack; this guitar thrives on gain and bite.

The five-way selector offers in-between settings with the pickups out of phase, and this is where things start getting exciting. The Teye’s tone rocks from the get-go, providing a lowdown Stonesy grind but retaining faithful note articulation. 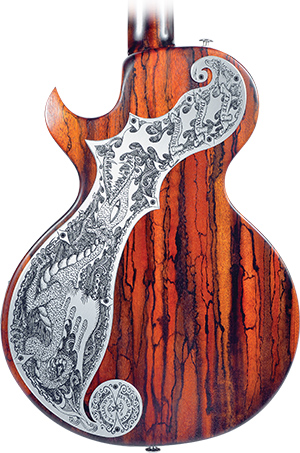 That’s only the beginning. Teye’s electrics include a Mood knob, which blends the pickups to access single-coil and humbucking modes, opening a rainbow of potential. You can dial in twang or churn out Zep-esque rock; it’s incredibly flexible.

Teye has also started adding his Mojo control, which serves as a cross between (another) Tone control and a Gain dial. Whatever, it dramatically broadens the sonic potential.

The Teye’s neck is about as thick as a Les Paul ’burst, but with a wider fretboard. It provides an ideal stage for rocking double-stops, bluesy bends, and pull-offs – all of which fit the vibe of this guitar to a T.