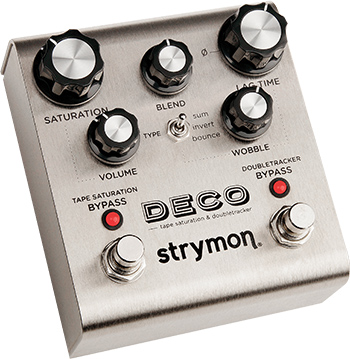 It’s scary, wielding a stompbox that’s smarter than you. Scary and thrilling.

Strymon’s Deco pedal is designed to provide the analog tape effects of a vintage recording studio, without the tape. Think Sun Studios in a box. Abbey Road in a can. Electric Ladyland at the end of your big toe.

With the Deco, you can dial-in tape saturation, slapback echo and longer delay, flanging, doubletrack chorusing, even simulated tape wobble, and more.

Yes, all in one pedal.

The Deco has two on/off footswitches for Tape Saturation and Doubletracker, along with bypass options. A three-position toggle moves between modes that then offer different options themselves. Five knobs have primary controls as well as pull-out secondary functions.

Together, the options are nearly endless, limited only by your imagination – which is the way a studio should be, right?

Feeling a might bit humbled by the Deco, we started simply. Plugging in a Gretsch 6120 and running into a new Supro Thunderbolt, we dialed in just a dash of tape saturation that also had the effect of mildly compressing the signal, slicing off high-end spikes, and bolstering the low harmonics.

As we judiciously added more saturation, the output sound grew thicker around the middle, like a diner having seconds – and then thirds – of devil’s food cake. Tasty tone, and without any unwanted calories to harm your shapely figure.

We then eased off the saturation and balanced it with some slapback echo thanks to the Blend knob. Instant Scotty Moore circa “Mystery Train.” By adding more delay, we could evoke Pink Floyd-esque excursions that continued to reverberate.

Just a dash of Wobble added a vintage vibe, especially when combined with the slapback. But spin the knob toward the horizon and the undulation created a flanging effect that was stunning.

Slowly feeling more confident, we began to experiment with the secondary functions. The Saturation controls can be used to trim highs and lows. The Doubletracker knob can switch the pedal into an auto-flange phase.

The Deco also includes an input for TRS stereo as well as outputs for stereo signals of your mono input. A Wide Stereo mode allows you to split the signals, pan, and lag a channel. An Expression pedal can be plugged in to allow foot control over any knob.

In the end, the Deco inspires you to create. As noted, the only limits are your imagination. All this, and not a single broken segment of tape.