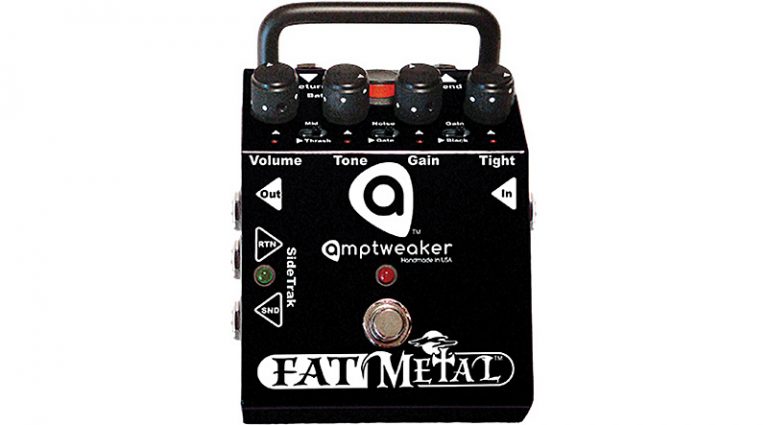 With all of the subgenres of heavy metal out there, it was only a matter of time before the pedal industry began tweaking its many circuits to meet the needs of discerning heshers everywhere.

Such is the case with Amptweaker’s FatMetal Distortion – a variation on the brand’s TightMetal, but warmer and – according to Amptweaker – more suited to “tremolo-picking black metal.”

The unit is housed in a black case with a safety bar covering its knobs, all of which light up in a devilish red. Other features include a true-bypass switch, a Tight Attack knob that provides a compressor-like control of note attack, and a built-in noise gate that kicks in based on the amount of gain being used. This feature is essential when running the FatMetal through a high-gain amp, as it all but eliminates background noise.

In addition, the FatMetal has two effects loops: one that works when the pedal is on and can be selected pre or post distortion, and something Amptweaker calls their SideTrak loop, which activates when the pedal is off to automatically shut off clean effects.

We were pleasantly surprised by the different tones the pedal produced through a vintage Marshall 50-watt half-stack, from medium overdrive to an end-of-the-world, all-out saturated metal distortion. Of particular interest was the amount of low end delivered to the amp, a quality often lost in high-gain pedals. Engaging the Thrash switch converted the basic metal tone back into a more mid-scooped tone reminiscent of mid-period Sabbath. Employing the Black Gain switch changed the pedal’s gain from a moderately heavy metal distortion to an over-the-top thick, buzzy tone that made sustain seemingly infinite and, once again, served the bottom end very well.

All this testing was done with a Strat and a humbuckers-equipped Les Paul; happily, much of each guitar’s character was retained. The Strat’s volume control successfully dialed back the amount of gain, resulting in a warm tone reminiscent of some of Robin Trower’s late-’70s work. The FatMetal also felt very much at home with the Les Paul, and in fact turned it into the perfect weapon for heavy metal face-melting. In all of the pedal’s modes the harmonic overtones were very musical.

An incredibly versatile overdrive, Amptweaker’s FatMetal, its name notwithstanding, could prove useful to players beyond your typical headbanger. But make no mistake, this pedal is capable of some of the heaviest tones we’ve ever heard, and would most definitely be a major upgrade to any shredder’s tone toolbox.