In 1965, fuzz was the “it” sound. Guitarists had recorded with fuzz before, of course, but after Keith Richards plugged into a Maestro Fuzz-Tone on “(I Can’t Get No) Satisfaction,” its sound was suddenly essential.

In England, finding fuzz was an endeavor; the Maestro was expensive and difficult to track down. As a result, even before the last notes of “Satisfaction” faded, players began devising homegrown options, setting abuzz The Great British Fuzz Pedal Boom.

The first and most famous was the Sola Sound Tone Bender, designed by Gary Stewart Hurst and on the market by mid ’65. Legend has it that Vic Flick – the guitarist responsible for the James Bond riff – brought his Fuzz-Tone FZ-1 to Hurst, begging for more sustain. Hurst adapted the FZ-1 to a three-transistor circuit that added sustain as well as a bit more bite to the boost.

Launched as the Tone Bender, it made instant converts of The Beatles, Jeff Beck, Pete Townshend, and Mick Ronson. Soon after, Hurst upgraded it as the Mk 1.5, as well as the Tone Bender Professional MkII, and Vox Tone Bender. During the fuzz-pedal “boom,” its DNA (along with that of the Fuzz-Tone) was used in other British pedals, including the Marshall Supa Fuzz. Imitation is indeed the most sincere form of flattery.

Inspired by the desire for fuzz, a new distributor got in on the act. From 1960 to ’64, John Hornby Skewes worked as the U.K. sales rep for Hohner, then Fenton-Weill guitars.

Skewes translated that cultural shift into a business; with his wife, Madge, he founded his own musical-instrument company in ’65, from his home in Garforth, in West Yorkshire – far from swinging London. Among his first products was a fuzz pedal.

To design and build his stompboxes, Skewes commissioned a small firm called Wilsic Electronics, in the village of the same name near Doncaster. Owner Charlie Ramskirr set to work.

“Charlie designed the pedals, and I guess he cribbed circuit ideas from others, though I do not know whether from the Tone Bender,” Skewes remembers.

Beyond the Fuzz-Tone and Tone Bender, there were few others from which to borrow. Regardless, the Hornby Skewes Zonk Machine made its debut in late ’65.

About that name. “Zonk” was ’50s slang for being bonked soundly on the head; it later came to mean being knocked out by alcohol or drugs. Either way, it was a fine description of the Zonk Machine’s powers.

The Zonk was a simple pedal housed in a folded-steel box with a basic footswitch and just two controls, labeled Fuzz and Swell. Cribbed or not, its look and layout was similar to the MkI Tone Bender, though it was painted a fashionable baby blue instead of the MkI’s gold.

Its sound, however, was more-complex. Like the Tone Bender, the Zonk boasted just three germanium transistors, but Ramskirr’s design provided more boost and a slight but pleasing oscillation. As one of the first Hornby Skewes catalogs promised, the ZZ.1 featured a “Highly developed circuit, using expensive American transistors.”

The Zonk’s price was £14 and change – neck-and-neck with the Tone Bender, and a bit rich for the typical British kid strumming his Fenton-Weill guitar. So, Skewes asked Wilsic Electronics to develop a less-expensive option, as well.

In ’66, the Zonk Machine II debuted, “…based on the same circuit as the Zonk Machine,” the catalog promised, but at a reasonable price – which meant silicon transistors in place of germanium. Retail price was just £8.

At the same, time Hornby Skewes was broadening his line with his own stompboxes based on other popular effects. The Dallas Rangemaster boosted treble response of darker-sounding British amps like the Vox AC30, inspiring Hornby Skewes to commission Wilsic to build him a line of similar units. Enter the Hornby Skewes Treble Boost TB.1 preamp, Bass Boost BB.1, and combined Selectatone TB.2, which could be easily mistaken for a Rangemaster (unless you looked closely).

Next, Wilsic combined the Zonk circuitry with the Treble Boost to create the Shatterbox. Also housed in a bare-bones folded-steel box, the effect used the silicon transistors of the Zonk II and had footswitches for Boost and Fuzz. Like other Hornby Skewes effects, it ran only off a 9-volt battery. One high-profile user was T-Rex’s Marc Bolan.

Skewes remembers selling the Zonk, Shatterbox, and Zoom Spring Reverb Unit to distributors across Europe, but never to any in the U.S. Wilsic also built a line of Miles Platting amps (named after a local burg) for Hornby Skewes, which soon expanded beyond his home to his town’s old cinema and car park, the Victorian-era police station, and two Methodist chapels.

That first-generation of Zonks and other effects came to a sudden end in ’68 due to the untimely death of Ramskirr. But there was more to it.

“The products had also had their day and more sophisticated products from the U.K., Italy, and the U.S. appeared on the market,” said Skewes. Unfortunately, he doesn’t have figures for the number of Zonks sold.

After the passing of Wilsic, Hornby Skewes later brought in JHS-branded pedals from Macari’s, in London (which was also making Sola Sound/Colorsound Tone Benders), as well as some from Italian suppliers. 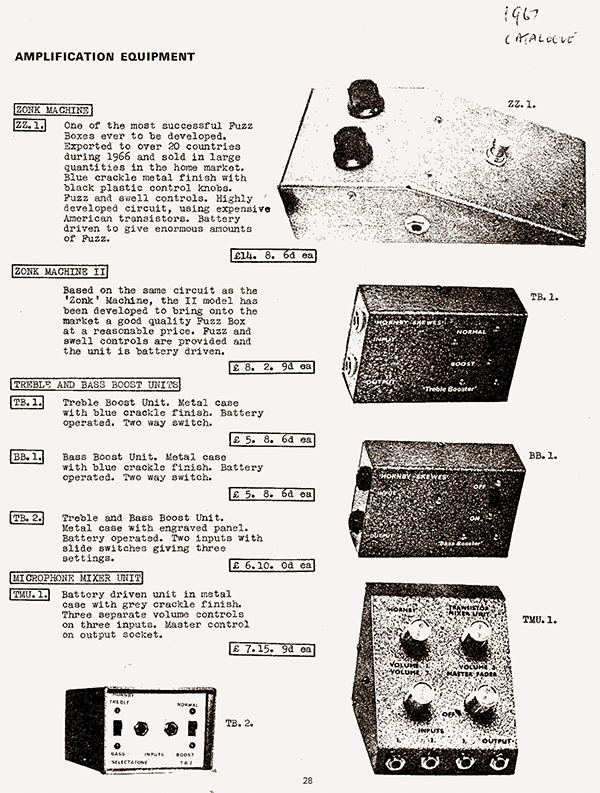