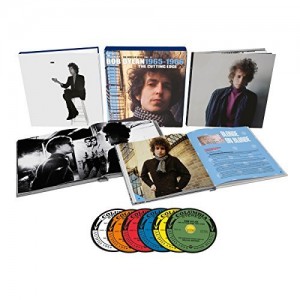 Oh, the shock! The outrage! The betrayal!

Truth is, no one should have been surprised when Bob Dylan and his electrified band took the stage on the evening of July 25, 1965 at the Newport Folk Festival and proceeded to blow the cobwebs out of the oh-so-pure acoustic folk scene.

This is the tale as told by author Elijah Wald in his electrifying (sorry) book. And it’s also what Mr. Zimmerman himself is letting us read between the lines of his latest Bootleg offering.

Dylan began as a rocker, way back when in Hibbing, Minnesota. He was plugged in to both mid-’50s rock and roll a la Little Richard and then-nascent rockabilly, as best it reached the far reaches of the Iron Range. Whether he was playing acoustic or electric guitar or piano, his first high-school bands were all about rocking out. And yes, they suitably shocked his fellow students and the good citizenry then, too.

Graduating to the University of Minnesota in Minneapolis – or at least to the neighboring coffeehouses – Dylan began to dig into acoustic blues and folk music. It was this fascination that he packed with him when he moved on to Greenwich Village, where it was a full-blown trend.

That Dylan should shrug off the mantle of Voice of a Generation to crank up the volume and lead that same generation in a new direction was all part of his ever-changing genius. “It Ain’t Me, Babe” was not a love song; it was a statement of refutation.

Wald’s book goes deep into Dylan, the folk and rock scene, and the public outcry. And it emerges as one of the best bits of Dylanology around – focused, insightful, smart, and a great read.

With his new Bootleg package arriving a suitable 50 years after the event, Dylan doesn’t bother arguing about the events: he simply opens the door into the process and shows how his sound developed. Here are rehearsal tracks, studio outtakes, previously unheard songs, and alternate working versions of familiar hits from his landmark albums Bringing It All Back Home, Highway 61 Revisited, and Blonde On Blonde. And they are stunning.

The Cutting Edge is available in multiple packages: a two-CD or three-LP set of highlights; a deluxe six-CD box-set, including a disc of alt takes of “Like A Rolling Stone” alone; and an 18-CD edition available exclusively at Dylan’s own website and limited to 5,000 copies featuring every note recorded during the 1965-’66 sessions, including every alt take and change of lyrics.

This article originally appeared in VG‘s March’16 issue. All copyrights are by the author and Vintage Guitar magazine. Unauthorized replication or use is strictly prohibited.