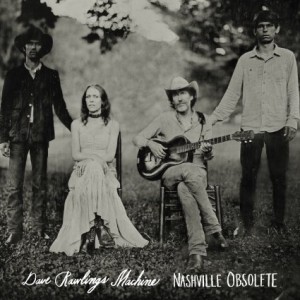 Americana fans are no strangers to guitarist Dave Rawlings. Largely building his rep on several releases by his musical partner Gillian Welch, Rawlings and his flatpicked Epiphone Olympic first stepped out as the Dave Rawlings Machine in 2009. This new disc is the project’s long-awaited second release.

Rawlings’ and Welch’s great knack is to imbue modern songwriting sensibilities with a dusty whiff of Bluebird and Bristol. Rawlings’ reedy delivery and the arrangement on “The Weekend” recall the Jayhawks at their lushest, and “The Trip” is an epic spoken-word tapestry bringing to mind John Prine or Townes Van Zandt.

Those expecting “Short Haired Woman Blues” to lift the tempo with a Lightnin’ Hopkins cover are met instead with a rueful cautionary tale that moves along atop gorgeous strings.

As modern as the songs can be, there’s an authentic old-time vibe throughout. It’s not difficult to imagine A. P. Carter collecting them during his famous perambulations but losing his nerve and keeping them to himself.

“The Last Pharaoh” and “Candy” lighten the mood a bit, hewing toward trad Appalachia, but most of Nashville Obsolete’s seven tracks (Welch-Rawlings compositions, all) are wistful affairs lifted in all the right places by Rawlings’ guitar and Welch’s harmonies.