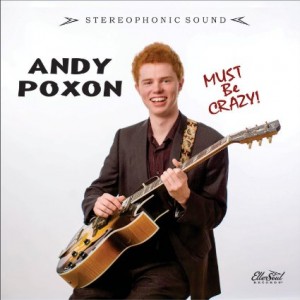 A former teen phenom, Andy Poxon is just now hovering around the legal drinking age with enough footage on the internet to chronicle his musical growth and development over the last half dozen years or so.

The switch from solidbody Teles, Strats, and Les Pauls to the semi-hollow Gibson 175 he sports on the cover of this new album may not be permanent or even exclusive. But it’s probably no coincidence that Poxin is expanding his scope; sometimes a new guitar leads you to explore new possibilities as well as helping you find new ways to get to familiar places.

Poxon has always shown an affinity for the styles of players like Scotty Moore – those with one foot in the big band era and another in the early days of rock and roll and electric blues, as well as that little window of time between them.

Horn-supplemented songs like the title cut and others show he’s moving along a more song-oriented path. They join ballads like “Already Gone” and “Living Alone” that mark him as a songwriter to watch.

If Poxon stopped here he’d be at an enviable place. Having the stuff to go even further means he’s someone to keep eyes and ears on for a long time to come.

Laurie Morvan – Cures What Ails Ya