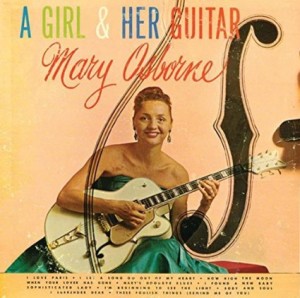 This isn’t just a reissue; the first CD appearance of Mary Osborne’s only solo album is an event.

Osborne was not just the first major female jazz guitarist, she was arguably the best ever – Emily Remler and Mimi Fox notwithstanding. In the ’40s, she recorded with Mel Tormé, Coleman Hawkins, and Mary Lou Williams; regularly jammed with Dizzy Gillespie, Ben Webster, and Art Tatum; and provided gritty backing on R&B sessions for Wynonie Harris and Big Joe Turner. And she later appeared on TV with Billie Holiday and Lester Young.

Osborne took up guitar and other instruments as a child, but became an avid disciple of Charlie Christian when she saw him playing electric guitar in 1938. She even sat in with him on occasion.

For her ’59 solo LP, she was backed by a quartet of musicians’ musicians: drummer Jo Jones, bassist Tommy Potter, pianist Tommy Flanagan, and rhythm guitarist Danny Barker. She swings like mad on standards like “I Love Paris” and handles the ballad “Sophisticated Lady” with a combination of energy and sensitivity. And “Mary’s Goodbye Blues” proves the lady was no mere novelty.

This generous edition adds 14 tracks, showcasing Osborne with Hawkins, Williams, and others.