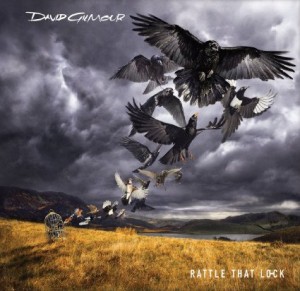 This is David Gilmour’s fourth solo album – although some argue that the last three Pink Floyd albums (recorded without Roger Waters) were ostensibly Gilmour solo sets. Floyd or not, this record captures Gilmour’s brand of serene rock and ballads, and works on that level.

The single “Rattle That Lock” is a radio-polished stomper, its groove a throwback to the urbanized blues-rock of a Robert Cray or Mason Ruffner. It’s likable and catchy, but Gilmour is staying close to his wheelhouse. You have to dig his economical lead work; the man never wastes a note.

The dark waltz “Faces Of Stone” could be favorably confused with a Mark Knopfler solo track and, surely, there is room for comparison between the two Stratmasters, both of whom work hard to escape their mega-band pasts. Gilmour drops in a soulful lead, deftly working around the mournful piano and accordion melodies.

“Dancing Right In Front Of Me” has a somber, Beatlesque vibe, perhaps intentionally bringing to mind “While My Guitar Gently Weeps.” Gilmour’s lead work displays his hallmarks of a richly compressed Stratocaster tone and oozing blues licks, though the swing-jazz section in the middle is distracting.

“In Any Tongue” is purely Floydian, a minor-key dirge with gravelly vocals and a soaring solo that will please fans – no question about it, this is what the man does best. Conversely, some tracks eschew guitar altogether: he verily croons on “The Girl In The Yellow Dress,” a bit of torchy bistro jazz that’s perfect for a stroll along the Seine. Here, the 69-year-old rocker steps outside his safety zone and succeeds.

Interspersed throughout the album are symphonic interludes that would work as film-soundtrack music. “Beauty” is a good example, an instrumental with echoey, lap-steel guitar licks over orchestral pads that morph into a solid groove for a few minutes. It’s unfortunate that this track, like so many others on the album, eventually fades out and doesn’t develop into something more complex or meaningful. An exception is “Today,” a midtempo funk jam that finally gets your heart rate pumping a bit, a welcome break after the preceding mellowness. Strat in hand, David adds a nice, greasy solo at the end.

“And Then…” closes the record with a restatement of the heralded Gilmour trademark – an orchestral minor-key vamp with bluesy Strat licks on top. Like much of the album, the track is cinematic and compelling, but ultimately disappears into a mellow, blurry haze.