Amp nuts of yesteryear likely aspired to the delights of Fender, Vox, or Marshall, or maybe hankered after high-end creations from Mesa/Boogie or others who were pushing the envelope of tube-amp design before “boutique” was a thing.

Chances are, though, that the amp that first excited our imaginations when the entire concept of playing the “electric guitar” was still young in hearts and minds – the one we lusted after beneath the covers late at night, catalog unfolded and flashlight in hand – was something akin to this Danelectro Viscount. To the kid saving money from odd jobs, the late-’50s Viscount’s specs looked pretty darn close to those of the Fender Vibrolux – 12 watts, built-in vibrato (that is, tremolo), two 6V6GT output tubes – and the Viscount had a 12″ speaker versus the Vibrolux’s 10″, and it cost a whole $29 less in 1957; $110 compared to $139 for the Fender. If those weren’t solid arguments to help get it under the Christmas tree, well, what would be? And that’s not even accounting for the cool preamp tube in the viewing window in the back panel.

Get the Viscount home, of course, and its quality and construction don’t quite stand up to those of the similarly equipped Fender. It’s tone? That’s subjective. Chances are, though, that your 12-year-old dreamer of the late ’50s and early ’60s hadn’t seen or heard any A-list amps up close, anyway, and when he or she plugged that lipstick-tube-loaded Dano U2 into this sweetheart, well, dreams came to life. 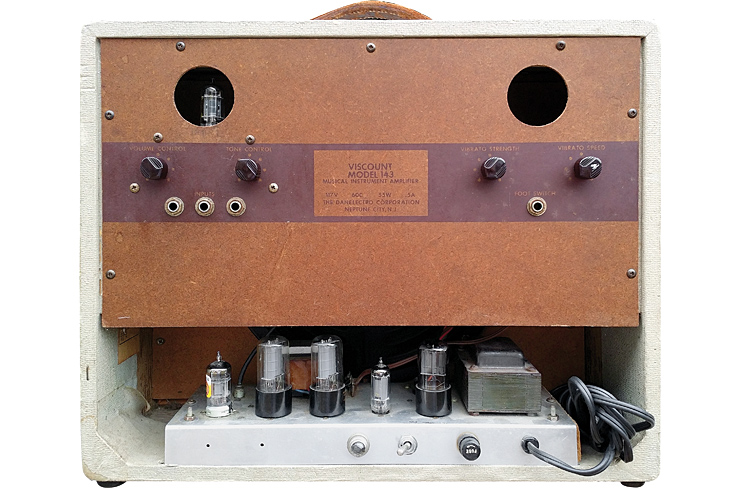 Put all that sentimental junk behind us, though, and the Viscount is one cool piece of Americana, regardless, and a groovy little recording amp in and of itself. Everything that makes it not quite up to cutting-edge par for its day – and that’s plenty – serves to make it a groovy alternative, with some fun, outside-the-box tones that sit great in a mix. It’s almost like they designed this thing to look good in a catalog, loaded it up with USPs (that’s “unique selling points” to us non-Madison-Avenue types), then pumped it out to the masses. But by some happy accident, the entire catalog-grade ethos adds up to a fun and funky whole, and an amp with its own unique sonic virtues. 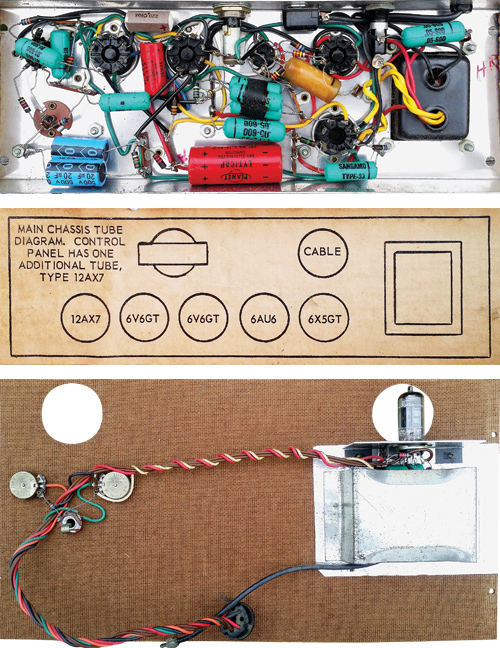 (TOP) The point-to-point wiring of the Viscount is populated by surf-green Sangamo signal caps, red Planet filter caps, and carbon-comp resistors, augmented by a pair of blue filter caps installed in recent years to keep the amp running. The brown disc in the lower-left corner is the underside of the RCA connector that delivers preamp signal to the output stage. The octal socket to the right of the big red filter cap takes the AC and DC supplies, and the tremolo control functions, to the back-panel controls.
(BOTTOM) Peek-a-boo: a lone 12AX7 stands lookout in the first gain stage right behind the Volume and Tone controls, connected to the main chassis via an umbilical cord of wires.

The particleboard cabinetry kicks it all off, and sets the pace for build quality, in general, while looking stylish, especially in the blond of this 1961 example, which took over from the black of the late-’50s amps. Hardboard of a thinner grade extends to the fabulous back panel, which serves as home to the controls, as well as that super-odd preamp tube placement. That’s a lot of trouble to go to for negligible gain (no pun intended), with all that wire stringing to and from the mothership power-chassis in the bottom of the cab. But again, it makes for one nifty USP. The debutante Viscount achieved its first gain stage with a 6AU6 seven-pin pentode tube wired as a triode, but that evolved into a 12AX7 some time before ’61, of which only half (one triode) was used. The amp’s three inputs feed that same lonely gain stage, which is connected to a straightforward treble-bleed Tone control. There’s no cathode bypass cap on this preamp tube, nor is there one on the driver side of the second 12AX7 in the cathodyne phase inverter, so you could fatten up the Viscount right quick – should you desire – by adding one at either or both positions. In its day, though, the Viscount was intended for clean playing at reasonable volumes, just enough to help students and beginners get in their chops; raunchy rock and roll was less than an afterthought.

A look inside the folded-steel chassis provides further thrills for the fan of true point-to-point wiring. Hey, why waste time and money on a circuit board when you can just string it all up from component to component? Between the surf-green Sangamo signal caps and the fire-engine-red Planet filter caps, it’s the full sonic rainbow in there. Between its small-ish output transformer and the low voltages operating within, the 12-watt rating is anywhere from realistic to optimistic. You could squeeze more juice from this format without trying too hard, but again, that clearly wasn’t the objective. The chassis also reveals a 220-ohm cathode-bias resistor between the two 6V6 sockets toward the upper left. That might seem a low value until you consider the Viscount’s 6X5 rectifier tube delivers only 265 volts to the output transformer’s center tap and 235 to the grids of the 6V6s – 80 to 100 volts less, respectively, than you’d find in the same parts of the tweed Fender Vibrolux.

“This amp sounds like a Silvertone 1482 and a Fender Champ got married and had a baby,” says VG reader Greg Allen, who supplied this Viscount for consideration. “I thought the Dano would have more bass response [than a Champ] with the 12″ speaker, but it doesn’t. It is all thrashy and mid-rich, with harmonic overdrive at reasonable volumes after 12 o’clock on the Volume control, regardless of the guitar. So it makes an incredible recording amp.”

The original Jensen C12R speaker is the perfect match to the Viscount’s tone and output, remaining supple and sweet at lower volumes, but breaking up smoothly when you crank it. And the tremolo is the icing on the cake. With controls for both Vibrato Strength and Vibrato Speed (the ’57 Danelectro catalog boasted this was the maker’s most affordable amp with such features), it uses a 6AU6 in a bias-modulated tremolo circuit tied to the 6V6GTs control grids, for a round, throbbing effect that is lushly hypnotic. A cool amp through and through, it’s one you can still pick up for easy money on today’s vintage market, satiating both the unrequited pre-teen guitar longings and current creative sonic desires in the process.