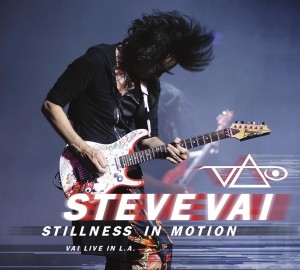 Steve Vai is the greatest rock guitarist of his generation. He’s the teenager who transcribed ridiculously complicated Frank Zappa tunes, and later toured as “The Little Italian Virtuoso.” Getting the Papal Blessing from Zappa is right up there with God choosing Moses.

In a post-Van Halen world, he one-upped the Dutch Indonesian and scorched the earth in Alcatrazz, Public Image LTD, and David Lee Roth’s band. He scared the bejesus out of Ralph Macchio in the film Crossroads, took over Whitesnake, and has been evolving his sound and solo vision ever since. He’s a spiritual risk taker who epitomizes stage presence, hip chords, odd time signatures, and harnesses the cosmic power of guitar feedback.

If you have any doubts about Vai, Stillness In Motion will set you straight. Whether you choose the double-CD set or the two-DVD collection – or both – it captures a transcendental concert recorded on October 12, 2012 at L.A.’s Club Nokia. Vai offers 22 flawless performances of the ethereal, the bombastic, and the sublime.

You can disagree that he’s the greatest rock guitarist of his generation, but you’d be completely and utterly wrong.