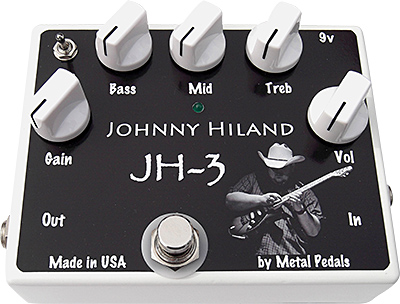 Like a Swiss Army knife, the multifunction Metal Pedals JH-3 Johnny Hiland has more options than you’d expect in such a small package.

Hiland, solo artist and session man for folks from Toby Keith to Hank III, was so inspired after playing through Metal Pedals’ Bomb Shell distortion (VG, June 2011), that he offered his working-man’s ideas for a variation on the design.

The resulting hand-wired (in the U.S.A.) JH-3 has the expected Gain and Volume controls, supplemented by Treble, Mid, and Bass controls, and a noise-reduction circuit for heavier gain stages. Housed in a rugged aluminum box with a sensible layout and an image of Hiland (perhaps a bit less seductive than the Bomb Shell graphic!), when plugged into a Fender Blues Junior and with its Gain and Volume knobs at 3 o’clock, the JH-3 offered plenty of fat, sustained distortion. The tonal controls functioned as subtle shaping tools, without radically EQ’ing the sound – rather tweaking their respective sonic ranges, allowing the amp’s controls to define a bass-, mid-, or treble-heavy sound.

With the JH-3’s Gain knob at 12 o’clock, blues lines and country picking were fluid and defined, with great sustain. Sustained power chording and advancing the Gain knob created more satisfying crunch, but also activated upper harmonics, and not just the predictable octave and two octaves up. The JH-3 allowed each note to have some clarity even through the pulsating sound. Maxing out the Gain resulted in a power-chord sound thick enough to butter bread. Backing off the guitar’s Tone knobs resulted in a “woman tone” with warmth and sustain that conjured images of the Ultimate Earth Mother.

Hiland’s day gig requires a little country-treble snap in his arsenal, so it’s no surprise that single-coil tones also benefited from the JH-3, with tones ranging from a sustained twang perfect for slinky double-stop bends to a full-throated chainsaw snarl. It sounded downright orchestral through a Holy Grail Reverb using volume-swell techniques.

The JH-3’s noise-reduction circuit is effective in reducing 60-cycle hum and focusing the response from a Vox wah while decreasing the racket from other pedals.

Despite its load of options, the Metal Pedals JH-3 is nonetheless intuitive, inspired as it is by the needs of a performing guitarist.

This article originally appeared in VGMarch 2015 issue. All copyrights are by the author and Vintage Guitar magazine. Unauthorized replication or use is strictly prohibited.