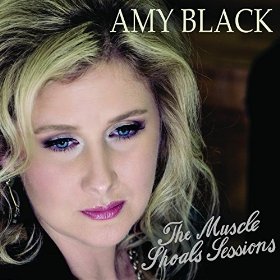 If Will Kimbrough’s name does not come up the next time you’re discussing great guitar players, then you ain’t saying nothin’. Kimbrough is always on the money whether putting a delicately strong acoustic solo to Paul Mitchell’s soul ballad, “Starting All Over Again,” a hit for Mel & Tim also recorded in Muscle Shoals in 1972; shouldering Robert Johnson’s “You Gotta Move” with gutsy resonator; or playing a heart-tugging break that seems to float in on a warm breeze for Amy Black’s lovely version of Arthur Alexander’s “You Better Move On.”

But Kimbrough knows whose record this is. So will you. And while Black shines on the classics – especially the Johnson tune and songs from Dylan, Don Covay and other greats – her originals are top notch.

Black’s “Please Don’t Give Up On Me,” has a ’50s-style intro and exit from Kimbrough that’s worthy of Duane Eddy or Hank Garland as well as a knockout horn arrangement from Charlie Rose. It’s as jukebox-worthy as any new song you’re likely to hear and, as track #6 here it marks the point you’ll realize how right you were to grab this fine record.