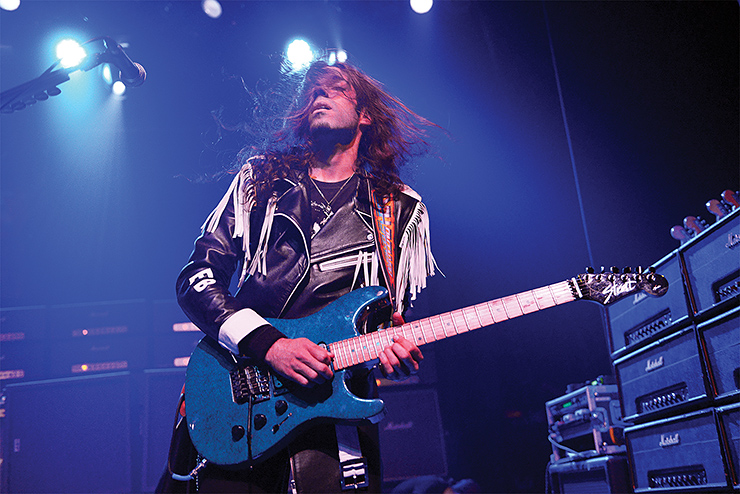 In case you were wondering, shred is not dead, and Ethan Brosh is determined to keep it that way. The Israeli-born Berklee grad is a young man with an old soul whose style harkens to the early musical fury of Tony MacAlpine and Vinnie Moore. His second album is called Live The Dream, and Brosh is living his with passion and fire.

Live The Dream is very different from your first record.
People ask me about the differences between the two, and I have to come up with an answer. I can see the differences, but someone else can probably hear the differences a lot better than I can. It was a conscious decision to keep the hard-rock instrumental format. It wasn’t like, “Oh, I’m going to go in a different direction.”

I have a bunch of acoustic tunes and I could have made a record like that, but I felt this is what I needed to put out right now. Iron Maiden is my favorite band, and I like the fact that they stayed true to who they were. Every album had its own feel and different sound to it. They were produced differently, but the core idea was the same. It was hard rock music done in the best way possible.

So, that was my idea. The people who know me know me for a certain thing. I wanted them to get more of that, and possibly in a better way. That was my thought behind Live The Dream, but I wanted to produce it in a much better way, which I did. I learned a lot from the mistakes I made with Out Of Oblivion.

Did you approach the songwriting differently?
A lot of the tunes on my first record were some of the very first I ever wrote. I was really young at the time, so you can hear that young passion, but they lack a certain maturity and songwriting knowledge. I’m not saying one is better than the other, it’s just from different periods of my life.

One can hear some hybrid picking on the record…
I do that a lot. Sometimes I play fingerstyle with distortion. Sometimes I’m not holding the pick at all and I’m still doing all these crazy techniques. It has a different sound and enables you to do a lot of cool things you would never be able to do with a pick. The acoustic songs on the albums were done flamenco-style; I started on classical guitar, and because I have that technique in background, I try to incorporate it with distorted guitar. It sounds good, but you have to have many different techniques that are your own ideas, which give you your own voice.

Do your songs change when you perform live?
I played a lot of material from Live The Dream on the last Yngwie Malmsteen tour; I kept the compositions pretty much the same because I put so much thought into the tunes. “Clean Slate” is a tune I’ve actually had for a few years that did evolve onstage. I used to play that by myself, but now it starts with guitar, then the band kicks in. The audience really didn’t expect it, and I could tell that people really dug it.

Are you still playing a Fender HM Strat?
I love that guitar. I want a white one with a maple neck. I’ve been drooling over that guitar for a long time. I’m also using amps by ISP Technologies. The guy who started ISP was the owner of Rocktron. He’s a genius engineer who makes the best guitar stuff out there.

The Decimator pedal is also by ISP. It’s in everyone’s rig all over the world – very popular. He also makes an amplifier called the Theta, in a few different versions – head, rackmount, combo, and now they’ve made a pedal out of it. It’s the greatest distortion pedal ever made.

You’re going to be playing with Carmine and Vinnie Appice…
We’re doing this thing called Drum Wars. It’s a cool concept where they have two drum sets, and they go at each other playing all the cool songs from their careers. We’re playing Black Sabbath, Dio, Ozzy, and I’m working on that material right now. It’s right up my alley.