In his decades of playing, Walter Trout has served as lead guitarist for John Mayall and Canned Heat, and forged a respectable solo career. But to say he’s been “living the blues” in recent times is putting it mildly.

VG recently interviewed Trout, who just three months prior had undergone a liver transplant. He was straightforward about his travails, just as he was honest in the documentary DVD that accompanies his recent album, The Blues Came Callin’, released in June.

“I had known for years that I had Hepatitis C,” he recounted. “But, the disease was dormant. In May or June of 2013, I started swelling up with fluid, and the doctors told me it was the liver becoming seriously ill.”

Treatment with newer drug protocols enabled Trout to become free of the disease, “…but it was too late to save my liver,” he said. “By March of 2014, I was told I had a maximum of 90 days to live if I did not get a liver transplant.”

His declining health isn’t evident in the music on The Blues Came Callin’, though his appearance on the DVD, filmed in early ’14, will startle those who recall Trout as a beefy, granite-faced growler with a shrieking hardtail 1970 Fender Stratocaster.

“Eric Corne, my producer, worked tirelessly with me on getting the right circumstances for us to optimize my ability to play,’ Trout said. “I often only had two good hours of playing in me; it took me a lot longer to record that way. My stamina was way down, but I gave 100 percent to playing and singing. I do not half-ass it! I can’t.” 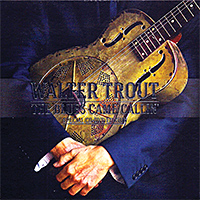 For most of the electric parts, Trout had to set aside his famed Strat in favor of a custom-made guitar.

“The Strat is so heavy – heavier than a Les Paul,” he said. “The new guitar was made by a local builder who calls his instruments Mark V guitars. Mark, who runs the company, got hold of a 150-year-old ceiling beam and fashioned a Strat-shaped body out of it. Then he took measurements of my old Strat and carved a neck that is very close. Seymour Duncan custom-made pickups for me. So, I ended up with a guitar that is very light, and plays like a dream.”

Trout also employed acoustic guitars on The Blues Came Callin’; on “The Bottom of the River,” one will hear a Collings in the left channel, and a metal-bodied Dobro in the right. Another resonator appears on the album cover, and while it wasn’t used on the recordings, it’s a personal icon to Trout, as it is owned by a former girlfriend, Delphene Langren.

“It’s a National Duolian,” he said. “It had been in Delphene’s family for years. I used to go to her house in my youth, and sit in her living room and play that thing. One day she said, ‘You’re getting pretty good. Why don’t you take it home and practice?’ So, she loaned me that guitar. It’s the same one I learned to play on so many years ago. The neck is very warped now, and believe it or not, it still has the same set of strings that I put on it in 1965! It needs some work, but it seemed very fitting to put it on the cover.”

Trout recalls the palpable uncertainty that surrounded the filming of the documentary.

“I was aware that I could be dead by the time it was released,” he said, unabashedly. “It was a difficult time in my life – my family’s, too. When that footage was shot, there were a lot of ‘What if?’”

Ultimately, Trout enrolled in a donor list in Nebraska, and a liver was transplanted on, ironically, for Trout, Memorial Day.

“Talk about a Memorial Day hero; the donor whose organs saved many peoples’ lives, including mine,” he said.

Trout remains in rehabilitative recuperation in Nebraska, and is optimistic about the future. He realizes there is a long, hard road ahead of him.

“I lost the calluses on my fingers, and I lost 100 pounds in six months, mostly muscle,” he said. “But I fully intend to be back next year. I see the beauty of the world and of life in a whole new way. God willing, you’ll see me back out there in 2015.”