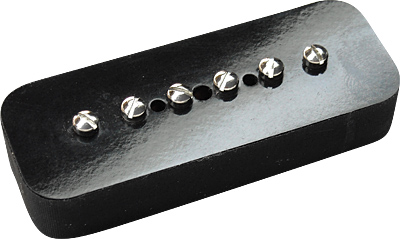 Harmonic Design must be doing something right. Specializing in replacement pickups, they boast a roster of satisfied customers that includes folks like Redd Volkaert, Otis Rush, Bill Frisell, Robben Ford, and Neal Schon. One of their latest offerings, the Harmonic Design VP-90 (for Vintage Plus) is intended as a replacement for vintage soapbar and dog-ear P-90s.

But P-90 aficionados can be a picky lot, so to test the veracity of Harmonic Design’s list of high-octane testimonials, two of their California-made VP-90s were loaded into a late-model Les Paul Deluxe and A/B’d with the stock P-90s in a pair of vintage guitars: a 1955 Gibson Les Paul TV Special and a 1963 Gibson ES-330. The results were pleasantly surprising.

The first noticeable difference was that the “thunk” which normally occurs when switching from the bridge to the neck pickup was absent on the test guitar. Gibson used the same pickup in both positions, which results in a louder, boomier, and sometimes muddier tone for the neck pickup and a nasally bridge pickup. Vintage P-90s sound great by themselves, but on two-pickup guitars they quite simply just don’t match very well when played through the same amp settings. Switching pickups on the Harmonic Design-equipped Les Paul was more transparent than on the Special and ES-330, and it was very evident that both pickups, made with Bakelite bobbins, were perfectly matched from an output perspective. The neck position pickup, while remaining warm, actually produced more articulate note definition than the vintage pickups, with greater clarity and individual string separation. The bridge pickup retained the same level of volume as the neck pickup, but had more bass response than the vintage P-90s while retaining the right level of bite. Rolling the volume back slightly in the middle position gave the same clear bluesy tone that one would hope for from a vintage dual-P-90 guitar.

The other big improvement that the Harmonic Design-equipped guitar displayed over the vintage test guitars was a substantial reduction in noisiness. This was noticeable both when each individual pickup was used, and, because VP-90s are hum-canceling in the middle position, when both were engaged.