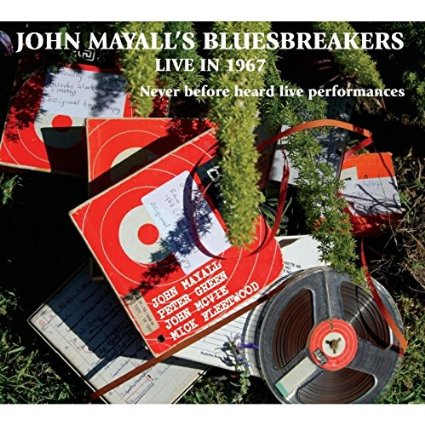 Tasked with replacing “God” (as Eric Clapton was proclaimed in graffiti around London), Green quickly let everyone know there was a new Les Paul picker in town, with arguably more control of sustain, vibrato, and dynamics. And he clicked with the rhythm section of bassist John McVie and new drummer Mick Fleetwood so well, it was only four months before they splintered off to form Fleetwood Mac.

With four Otis Rush tunes and an equal number from Freddie King, Green’s distinctive fire-and-ice approach is still stunning 48 years later. So much so that the roughness of the one-channel reel-to-reel tapes (nicely restored) is hardly noticed.
More than anything, Green could construct compelling solos without a million notes, as he does beautifully on “Have You Ever Loved A Woman” – before kicking in the afterburners on Johnny “Guitar” Watson’s “Looking Back.” No wonder B.B. King said, “He makes me sweat.” 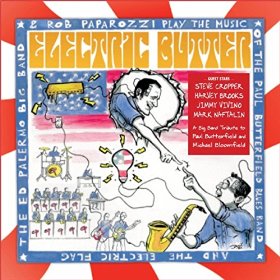 That same year, after serving as lead guitarist on the first two Paul Butterfield Blues Band albums, Mike Bloomfield debuted his new band, Electric Flag, at the Monterey Pop Festival. Both bandleaders wanted to broaden their sound and repertoire by adding horns. So a tribute to both horn-era bands is a fantastic idea, and the Ed Palermo Big Band (16 pieces, not counting guests) pulls it off with flying colors.

There have been other Butter and Bloomers tributes, including CDs to each (representing wider repertoires) by the Ford Blues Band, led by drummer Patrick Ford, featuring his legendary brother, guitarist/vocalist Robben Ford. Their problem was they were too democratic. When one singer (guess who) is obviously the strongest, letting everyone take a turn at the mic just dilutes things. Electric Butter avoids that problem by featuring Rob Paparozzi on vocals and Butter-esque harp throughout.

Lead guitar chores are swapped by Jimmy Leahy and George Naha, and along with Butterfield keyboardist Mark Naftalin and Flag bassist Harvey Brooks, guests include guitarists Steve Cropper and Jimmy Vivino – the latter sounding uncannily like Bloomfield on the opening “Killing Floor.”

Obviously, with such different instrumentation, the object isn’t to reproduce the songs exactly – a wise decision. “Walking Blues,” for instance, has the feel of Butterfield’s later, Better Days rendition, which had no horns.

A lot of love clearly went into this project (booklet essays by Naftalin, Brooks, Cropper, and Flag keyboardist Barry Goldberg, and Butterfield’s son, Gabe, playing tambourine on “One More Heartache”), and it yielded stellar results.