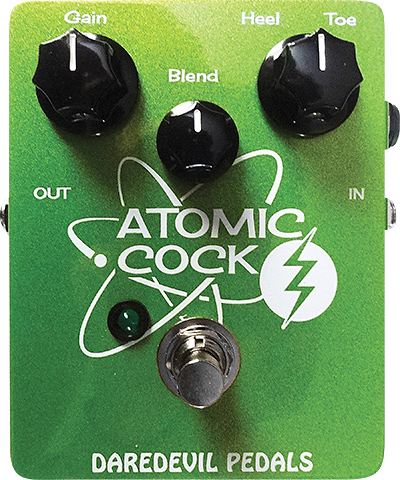 Despite the many clever take-aways one could derive from its name, the Atomic Cock is “just” an effects box offered by Daredevil Pedals.

A variable fixed wah with adjustable gain, it offers more tonal options than a traditional wah while circumventing the tedious search for the notched sweet spot used by guitarists like Carlos Santana, Michael Schenker, and Mark Knopfler.

A true-bypass stompbox without buffers, it allows the user to blend the effect into their amp’s signal, and it still offers a wide tonal spectrum just like a standard wah. Its hip metalflake green enclosure displays a well-thought design.

The Atomic Cock’s Gain knob lends more or less grit and volume to the signal, while the Blend knob allows the player to mix variable amounts of their amp’s tone with the sound of the effect. The Heel/Toe knob, as the name suggests, replaces the rocker pedal normally found on a wah, producing all the filtered highs and lows without all the inaccuracy of foot operation. A green LED is situated just to the left of the On/Off switch near the bottom of the pedal, which can be powered by a 9-volt battery or adapter.

Using the Atomic Cock with a clean amp shows just what this pedal is made of. Starting with the controls set at 12 o’clock, the pedal immediately introduces the user to a world of snarky “cocked wah.” The sound isn’t as luxurious as an upscale boutique wah, but it adds just the right amount of quacky goodness to distinguish itself in a band mix. With the Blend knob all the way to the left and the Gain knob maxed, the Atomic Cock offers a dirty boost minus wah and with more bass.

Running through a dirty amp for soloing is where the Atomic Cock excels. The three knobs are perfectly teamed for crafting smooth-singing filtered tones in classic Schenker fashion. It’s a compelling combination of nasal warmth and bite with grittiness and tonal flexibility that can be preset, left, and returned to. The Heel/Toe knob affords full honking sweep, while the Blend knob lets the user refine their sound with plenty of room for an amp to retain its character.

The Atomic Cock is a great idea and a very musical pedal, useful for a number of tone-shaping functions. It could do wonders to break a player out of a tonal rut or add extra sauce to solos.