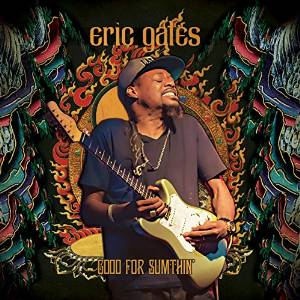 Eric Gales is a disciple of Jimi Hendrix, Frank Marino, Robin Trower, Stevie Ray Vaughan, and Eric Johnson. Yet this new CD is a soul album, filled with hot licks.

Good For Sumthin’ is also a gritty blues-rock record with a low-down feel, lush gospel harmonies, and sizzling guitar. Lyrically it follows the same path of previous records: semi-autobiographical yarns about rough times and sociopathic women. But Saadiq allows Gales to explore his soul-rock leanings à la “You Give Me Life.” “Tonight (I’m Leaving)” takes this further with its deep funk and extroverted guitar, while the acoustic “Show Me How” displays Gales’ smoother side.

His cover of “Miss You” by the Rolling Stones is a pleasant surprise, while his backing band simmers in a deep pocket of unadulterated funkiness throughout. Gales cuts heads with Zakk Wylde on “Steep Climb,” then finds his moment of Zen on “E2 (Note For Note)” with his spiritual leader Eric Johnson. Throughout, Gales burns like napalm.