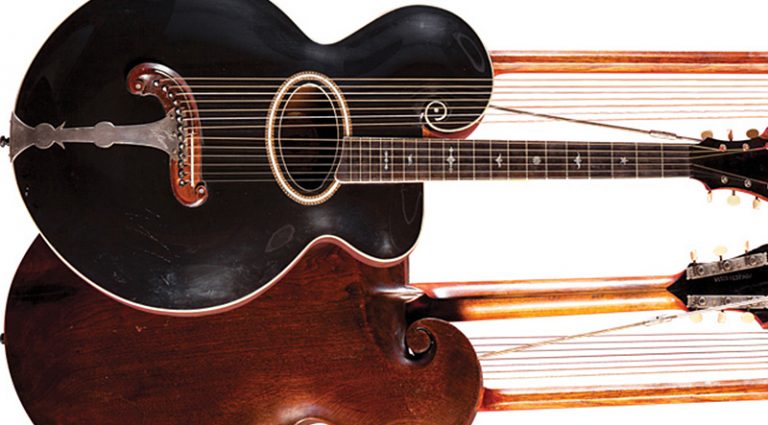 Harp guitars with a standard six-string guitar neck and varying numbers of sub-bass harp-style strings have been made by a variety of American builders. Some of the best-known include Gibson, Joseph Bohmann (of Chicago), Knutson (Seattle), and the Larson brothers (Chicago), who made them primarily under the brand of Dyer (a distributor based in St. Paul, Minnesota). Even Martin experimented with a few harp guitars more than a century ago. Bohmann and Gibson produced harp guitars with carved tops, whereas others produced flat-tops with harp extensions.

The concept of producing fretted instruments with a standard neck and harp extension originated during the Renaissance, with lutes that were given harp extensions.

Gibson harp guitars originated with Orville Gibson himself, who produced harp guitars, six-string guitars, and mandolins from the 1890s until he sold his patent to a group of Kalamazoo businessmen which in 1902 incorporated the Gibson Mandolin-Guitar Company. The 1902 Gibson catalog featured four harp guitar models – the R, R-1 (with slightly more ornamentation), the U, and the U-1. The R was their least elaborate model at that time featuring a 17 7/8″ wide body and 25 1/2″ scale. The R-1 was same size and appeared only in the 1902 catalog, whereas the R was continued until circa 1907.

The Gibson Style R you see here is typical of a circa-1906 model, with a carved mahogany bridge with scroll ends. Though the bridge is glued to the top in much the same manner as the bridge on a flat-top guitar, it is also held in place by a metal-strap tailpiece. By late 1907, the scroll shaped, fixed bridge was replaced by a moveable bridge and a double-trapeze special design tailpiece with string retaining pins mounted on a tortoiseshell grain celluloid crossbar. The reinforcement rod with turnbuckle adjuster running between the scroll and the six-string peghead is typical of 1906 onward. The star-and-crescent peghead inlay harkens to the days of Orville Gibson, who used this inlay pattern on many early Gibson models. The interior label in this instrument includes a photo of the face of Orville Gibson and one of Orville’s lyre-shaped mandolins which is typical of Gibson instruments made prior to 1909.

The carved top and carved back and scroll on the upper bass bout, as well as the oval sound hole, are similar in construction to Gibson artist-model mandolins. Though the earliest Gibson catalog specifies maple back and sides for harp guitars, virtually all which have surfaced made from introduction through 1907 have walnut back and sides. Later catalogs continued to specify maple back and sides, however the typical wood utilized was, in fact, birch, which is relatively similar in appearance to maple. Birch was the standard wood used by Gibson after 1907 for backs and sides on almost all of its guitars until 1925 and was used on A model mandolins as well as the F-2 mandolin prior to 1925, though the F-4 mandolin had figured-maple back and sides. From 1925 onward, Gibson phased out birch in favor of maple.

The original version of the style U in the 1902 catalog had a 21″-wide body and 27 1/4″ scale. The first version featured a six-string neck and 12 sub-bass strings. By 1906, the style U had a 25 1/2″ scale and by 1908, the scale had been reduced to 243/4″, the same as other Gibson standard single neck six-string guitars, and by 1913 the body width had been reduced to 18 3/4″ inches resulting in a much more comfortable instrument to play than the early style U. The Style U went through numerous evolutionary changes over the years, culminating in an instrument with an adjustable truss rod in the neck and a height adjustable standard archtop guitar bridge for the six string neck by late 1921.

Though style U remained in the catalog until 1939, there is little evidence any were made after the mandolin orchestra boom died in the early ’20s. Once demand for harp guitars ground to a halt, Gibson continued selling instruments from remaining stock and listed them in the catalog until supplies ran out.

Gibson harp guitars never sold in large quantities, likely due in large part to their high price and the fact they were unwieldy and uncomfortable to play. Gibson did, however, devote significant catalog space to harp guitars and even touted them as the ultimate evolution of the guitar. Early catalogs include impassioned promotions reminiscent of biblical passages.

Though Gibson’s statements that the harp guitar would render the standard six-string guitar obsolete proved to be untrue, there are still musicians composing and playing music on harp guitars today and a number of makers producing very fine new harp guitars. If anyone can be said to have been influential in this movement, it would be the late Michael Hedges, who played a Dyer harp guitar made by the Larson Brothers. Though Gibson harp guitars are among the most artistic and well-crafted, most modern harp-guitar players use vintage Knutson or Dyer/Larson models or modern instruments based upon Knutson/Larson design.