Prior to Gibson’s innovations, mandolins were bowl-back instruments with a lute-like back usually constructed with rosewood or maple back ribs and a bent spruce top with an oval sound hole. Earlier guitars typically had flat tops and backs, and were designed for gut strings. In 1898, he received a patent for the concept of constructing the neck and rims of the body from one piece of wood. In 1902, he sold that patent to a group of Kalamazoo businessmen who established the Gibson Mandolin-Guitar Manufacturing Company. Though Orville owned stock in the company and initially was involved with training employees, by the end of 1903 he was no longer involved with the corporation, though he continued to make a few instruments on his own and received a monthly pension until his death in 1918.

Orville’s patented “unitary” neck-and-sides construction was abandoned shortly after the company was incorporated, and the model lineup was standardized; guitars were given L designations (L-1 through L-4), the symmetrical pear-shaped mandolins were dubbed style A (also 1 through 4) and the asymmetrical “scroll” model mandolins became the F-2 and F-4. Gibson’s famed acoustic engineer, Lloyd Loar, was involved with the design of the F-5, introduced in mid 1922, as well as the H-5 mandola, K-5 mandocello, and L-5 guitar. While Gibson had been making instruments with carved tops and backs since the days of Orville, the style 5 instruments were the first to employ f-shaped sound holes, a longer neck with more frets clear of the body, an elevated fingerboard extension permitting the top to vibrate more freely, and parallel tone bars.

With the exception of harp guitars, which were made in very limited quantities, style 5 models cost significantly more than any other instruments in the Gibson line, and were not, at first, a commercial success – not due to quality problems or even their price, but because they were introduced as the mandolin orchestra boom was ending and shortly before the rise of jazz and big-band music (which suited an f-hole guitar). By the mid 1920s, having the best mandolin in the world was equivalent to having the best buggy whip after the invention of the automobile. The F-5 was introduced too late to take advantage of the classical mandolin orchestra movement and at least 20 years too early to take advantage of the rise of bluegrass. The H-5 and K-5 also did not benefit from the rise of bluegrass music, but the L-5 became highly successful with the introduction of big-band orchestral jazz in the ’30s and remained popular for many years as a rhythm instrument. 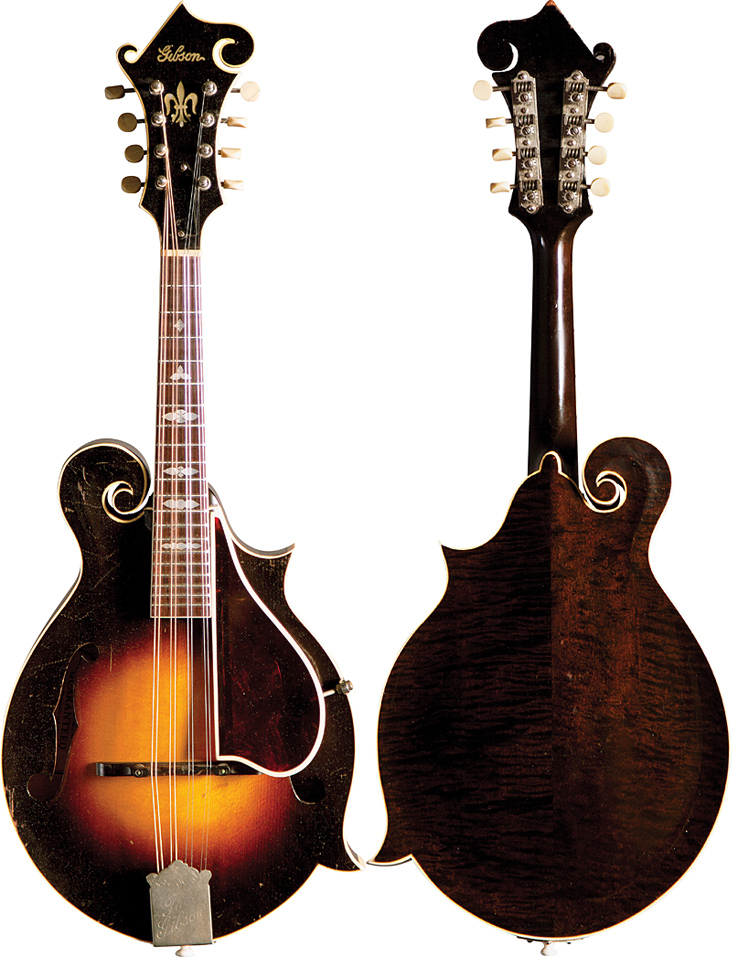 By the mid ’30s, country music was on the rise and a number of players in groups such as The Monroe Brothers and the Blue Sky Boys were using mandolins. Concurrently, the Big Band era was in full swing, with many musicians utilizing f-hole guitars. However, this was also during the Great Depression, when most players had little money to spend and companies like Gibson were struggling. In spite of these economic obstacles, the music scene was very active. Gibson and other companies strived to introduce affordable new models to meet changing demands of players. Since Gibson already had guitar and mandolin styles 1 through 5, when they introduced new f-hole models priced below the style 5, they opted to use styles 7, 10, and 12 for archtop guitars and artist-model mandolins. During the Depression, most prices remained stagnant while some fell. The F-5 remained $250 retail while the F-7 was priced at $125. The F-7, 10, and 12 first appeared in the November 15, 1934, Gibson price list.

The F-7, 10, and 12 were clearly introduced to be a more affordable alternative to the F-5. However, like the oval-hole Gibson mandolins, they feature a neck joining the body at the 12th fret, whereas the F-5 has a neck joint at the 15th fret, which puts the bridge at the center of the body and positions it correctly at the center of the sound holes. This long neck also permits players to utilize closed chords in higher positions, which is critically important for bluegrass musicians, who do much of their music in the keys of A and B. Although many bluegrass players refer to the short-neck mandolins as having a short scale, they are mistaken; the fret spacing and the scale length from nut to bridge are exactly the same, but the bridge position on the body is different. The F-7, 10, and 12 have a body of the same size and shape as an F-5 and the sound holes are in the same position on the top, however, Gibson opted to use a short neck on the 7, 10, and 12, resulting in the bridge being moved lower on the top, into a position not centered on the sound holes, and consequently looks strange compared to the F-5. It is not possible to move the sound holes on these models to center them on the bridge because they would then be moved so far down that the bottom of the hole would be in contact with the side of the body.

Though it is physically possible to move the position of the sound holes on the scroll model, there is only one place where they look aesthetically appropriate such that the size and shape of the scroll body dictates their placement. The long neck of the F-5 very likely was not specifically designed to appeal to the demands of players in the early 1920s, but was the outcome of placing the bridge at the center of the sound holes. Loar obviously wanted the power and tone that could be achieved with sound holes, parallel tone bars, and elevated fingerboard, which were debuted with the F-5, but the long neck, in all probability, was a consequence of this design rather than a primary motivation. Classical players do not use the closed chop chords that drive bluegrass. And, while talented players such as Dave Apollon used an F-5 prior to World War II, it was not until 1946 through ’47, when Earl Scruggs and Lester Flatt were part of The Bluegrass Boys band, that Bill Monroe appears to have discovered that the F-5 was capable of effects never before attempted on mandolin and was ideally suited to providing powerful, barking rhythm chop chords to drive a bluegrass band that featured banjo, fiddle, guitar, and upright bass.

Since Gibson already had the neck pattern for the F-5 long neck and the cost to make a neck three frets longer would have been inconsequential, this leaves us to question why they chose to do this. The only logical explanation is that these instruments were produced during the depth of the Great Depression, when Gibson was calculating costs to the 10th of a cent in an effort to keep its doors open; in the wake of the mandolin orchestra boom, mandolin sales plunged. The mahogany short necks used on the new models were of the exact dimensions and wood as on the oval-hole F-2 and F-4.

Gibson likely had hundreds, if not more than 1,000, partially completed neck blanks of correct dimensions for an F-2 or F-4. Rather than build new necks of the same length as an F-5, it appears Gibson opted to cut costs by utilizing its existing inventory of neck blanks on these new models. In addition, the F-7’s “redline” case also fits an F-5; Gibson used short-neck cases for the early F-2 and F-4 models, but by by the mid ’30s built long-neck cases only, since they fit both neck lengths.

While F-7 mandolins are very good instruments, there’s no doubt had Gibson opted to make new necks of the same length as an F-5, that vintage F-7, F-10, and F-12 mandolins would today be far more sought after and valuable.

Without a doubt, the most famous F-7 mandolin is the one Bill Monroe played in the ’30s. In the early ’40s, he acquired a 1923 F-5 signed by Lloyd Loar, which he used throughout his career with Bill Monroe and The Bluegrass Boys.

The F-7 shown here bears serial number 91363 stamped on the interior paper label (visible through the bass-side sound hole) and factory work order number 1141-7 stamped on the wood of the back (visible through the treble-side hole). According to Joe Spann, author of Spann’s Guide to Gibson 1902-1941, this mandolin bears the earliest numbers for this model he has encountered in Gibson records, and he suspects it may be the first F-7 made. The factory work-order number indicates it was the seventh instrument in that batch (which may have included 10 to 15 instruments). However, at the time, Gibson did not assign serial numbers, install paper labels, or do final setup until an order was received. As a result, instruments within a work-order batch in some cases were shipped at widely differing times, which means this mandolin may have been the first one shipped. Either way, it’s a fine-sounding example, and while it does not have the typical bluegrass-type sound, it has excellent volume, clarity, and tone, which make it an ideal instrument for old time, jazz, classical, and a variety of other musical styles.