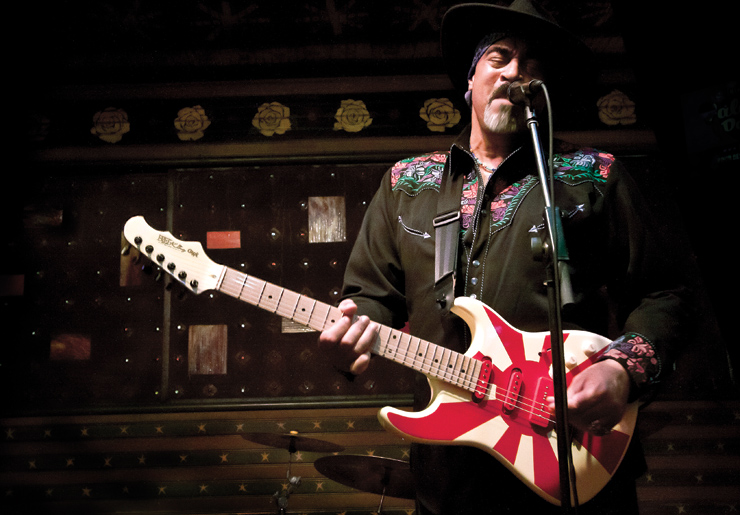 Gregg Wright is a force to be reckoned with. He took the top spot in the Southern California Blues Society’s annual Battle of the Blues Bands, and will move on to represent Southern California at the International Blues Challenge, in Memphis. He has opened for Albert and Freddy King, but is probably best remembered as the guitarist on The Jackson’s 1984 Victory album and tour. His live shows burn and his records inspire.

You started off playing blues, went on a detour, then returned to the blues. What happened?
Blues was the music of my parents and grandparents. I didn’t want to know nothin’ about that. I was running away from that. Initially, I liked to play loud blues-rock – Hendrix, Beck, Cream, which really was a hyperamplified form of blues. I started with that, but it was easy for me to transition into classic blues because I heard my parents play that. It was a self-acceptance thing. I had to acknowledge that the blues was in me, regardless. I had to make peace with that.

How do you manage your artistic integrity on the traditional blues circuit?
By playing what I want to play, playing what I really feel inside, and not being afraid to express that. Ultimately, you have to tell your own story. You can’t tell Muddy’s story. You can’t tell B.B’s story. You can only tell your own. My feeling is that if you are true to yourself, it tends to make things move. Don’t worry about what the market is dictating or who says what you have to do.

You’ve managed to please traditional blues fans while playing with a harder edge.
Yeah, but I’m getting ready to upset all them motherf***ers (laughs)! I’m going to make them mad. The record I’m working on right now is just insane. I’m just letting it all hang out. We’re playing real rough with this one. King Of The Rockin’ Blues was just cruise control.

Are you liberated now that you’re accepted within the blues community? Winning the Battle of the Blues Bands gives you cred.
I do what my heart tells me to do. On the new record, some of it is real rock. Some of it is real rough, but leans toward blues forms. I had time to think about things and figure out exactly what it is I wanted to do. No matter what I do, if it’s rock or even if it’s something classical, at the core of it is going to be blues. That’s where I’m from.

Who were you listening to, coming up?
Hendrix and Santana. They were rockers, but they were rockers with the soul of a jazz band. They had a jazz sensibility as far as creativity and form. Post-Abraxas Santana was deep, heavy vibe s**t with the improvisation, especially Caravanserai. That s**t is just f***ing ridiculous!

You opened for Albert and Freddy King. Did any of that rub off?
Freddy King did because he had a rock edge to him. He had a big, fat, howling tone and some funky grooves behind his s**t. He was really one of the first blues-rockers.

What kind of gear are you using?
I’ve been using a 100-watt 1×12 Marshall Valvestate combo for 15 years. I’m also using my Fret-King GWR guitar. I’m playing that exclusively. When I play the Fret-King, it’s like heaven opened up. I suddenly heard my own voice for the first time. The tone of it, the feel – you can beat the hell out of the whammy bar and that Trev Wilkinson construction stays in tune no matter what. The pickups do everything that I want. On the floor, I use an old Fulltone OCD and a Boss DD-7 Delay. It sounds really good.

When you hear stuff that comes out that sounds like nobody but you, it’s a mind blower.

What’s next for you?
I want to get the new record and the International Blues Challenge out of the way. For today’s musician, there’s never been a better time. A guy can write his own ticket if he’s clever and has enough drive. I use everything available to me – iTunes, CD Baby, selling CDs at shows, and consignments at independent record shops.

An independent musician can be like the Viet Cong; you’re a little guy coming through tunnels and messing with the greatest army in the world (laughs) – quick, streamlined, and dangerous. That’s how you have to think. Music-industry people don’t have your best interests at heart. They don’t give a s**t about music. You’re just a commodity. You could be a Kleenex for all they care.