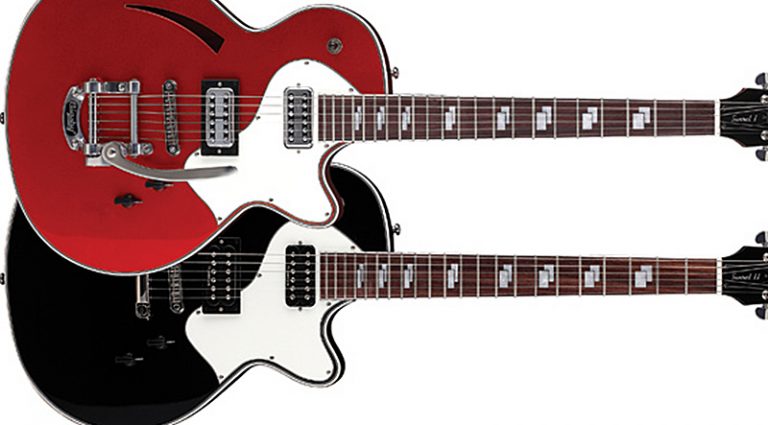 When Cort isn’t busy making guitars and basses for major musical instrument companies, they’re hard at work building some pretty cool instruments under their own name. From jazz boxes to the Gene Simmons AXE Electric Bass, Cort covers a lot of territory.

Fit and finish on the Sunsets tested was flawless, with sharp inlays and nicely dressed frets. The Sunset I features a bit more of a retro vibe, with a single soundhole, Bigsby B50 vibrato tailpiece, tune-o-matic roller bridge, and TV Jones Classic (neck) and Classic Plus (bridge) Filter’Tron humbuckers. The Sunset II leans a bit more toward the modern, lacking soundholes and employing a locking TonePros stop tailpiece, tune-o-matic-style bridge, and two exposed-coil TV Jones LTD humbuckers. Both are relatively lightweight (about eight pounds) and very well-balanced, whether you’re sitting or standing. Their comfortably slim C neck profile and a low action make for great playability.

Both the Sunset I and II were tested through a Fender ’65 reissue Twin Reverb combo with a Tube Screamer and a Homebrew Paradrive mixed in for some overdrive. It didn’t take much to coax a killer rockabilly sound out of the Sunset I and the Twin – a full, clear low end, super-punchy mids, and shimmering highs abounded. The body construction really combined with the TV Jones Classics to give pop to the midrange and snap to the highs, producing a ton of old-school Gretsch-y jangle. The Classic Plus had a clear fat sound which, when combined with the somewhat laidback Classic, produced an ultra-lush middle-position sound. The slightly hotter Classic Plus also performed well with some overdrive dialed in – very crunchy with no unwanted squealing, suggesting a clear, fat overwound P90 sound. The Sunset I’s Bigsby had good feel and relatively good tuning stability thanks to the roller bridge and Grovers, although heavy use did result in a few tuning issues, mainly with the wound strings.

While the Sunset II’s sound palette retained a thick, natural midrange punch, it definitely had a tighter, slightly more aggressive sound than the Sunset I. The TV Jones LTD ’buckers have slightly narrower bobbins (about 2 mm), larger pole pieces, and a thicker Alnico V magnet than a standard humbucker, which helps focus midrange and adds clarity. Where the Sunset I had a classic jangle to its highs, the II had a bite that made overdriven chords and single notes really jump out while retaining a smooth midrange.

While both guitars excel at coveted rock tones with a thick rockabilly vibe, their semi-hollow characteristics give them very usable jazz-box tones, as well. With the tone controls rolled back a bit and the neck pickups engaged, they have a dark, rich tone that retains note clarity. Those who are looking for such versatility, but who don’t want to deal with a cumbersome hollowbody and the feedback produced when cranked up, either the Cort Sunset I or II might be just the ticket.