In each issue of “Signal Chain,” we’ll take a guided tour of pro players’ pedalboards. We’re calling the feature “Star Board,” and we kick it off in this issue with a look at two of Carl Verheyen’s most-used pedal setups. 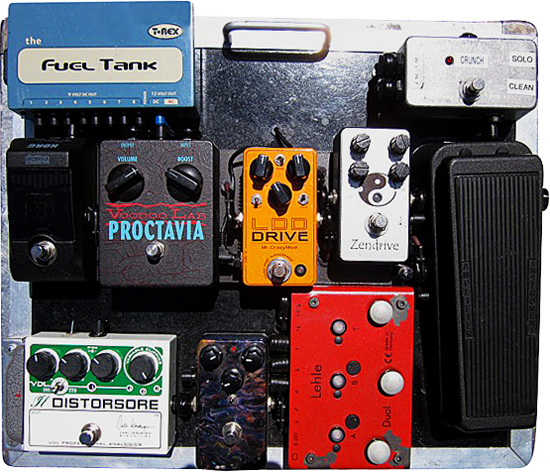 Verheyen’s primary pedalboard for stage use has traveled the world with him. “I plug the guitar into a Crybaby wah and from there it goes to the red Lehle switcher with the Carl Verheyen mod,” he said. “This means I can hit just one button to switch between rigs, and I never have to look down to find the A or B channel while singing. For the clean-rhythm side, I go out through the Zen Drive pedal to the Clean output of the silver routing box at the top right. My delays and reverbs are rack mounted for both sides of the A/B rig.

“The distortion side (B) hits a Landgraff Perfect Distortion pedal (bottom middle), then my signature Il Distorsore pedal from Analogics. Next is the yellow LDD distortion pedal by Mr. Crazy Mod I got in Thailand, and the Voodoo Labs Proctavia is last. As you can see, I use the Korg Pitch Black tuner and the T-Rex Fuel Tank for power. The entire board is wired in a sealed casing on its underside – bulletproof on the road. I used all these pedals on my latest album, Mustang Run, especially the Il Distorsore on most Stratocaster solos and the LDD drive on ‘Last days of Autumn.’ I used the Landgraff with a Les Paul on ‘Taylors Blues’ and with a ES-335 on ‘Spirit of Julia.’” 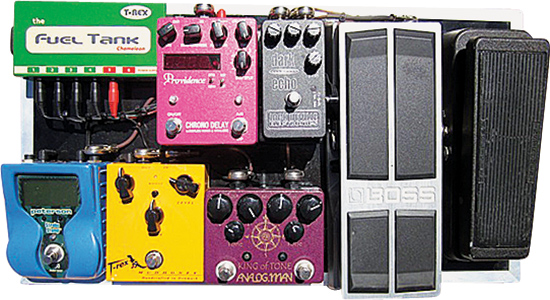 Carl Verheyen’s “Pedalboard #2” is a studio board he uses to run a large effects rack he employs for soundtrack work and other recording projects. “The guitar goes into a Crybaby wah on the far right,” he said. “Next is a Boss volume pedal for swelling-in chords and ethereal sounds used often in the film scores. I follow that with an Analogman King of Tone pedal, which combines very nicely with the T-Rex Mudhoney next to it. I then feed a Dark Echo pedal by Jack DeVille Electronics, and the Providence Chrono Delay, which has amazing control over time and tempo parameters. The Peterson tuner comes off the volume pedal for silent tuning and power is supplied by a Fuel Tank by T-Rex. I used this board for the title track on Mustang Run, especially the ethereal tones in the intro, called ‘Passage to Run.’ The two distortion pedals yield many combinations of dirty tones, and the Chrono delay means I never have to dig around for a click track chart to time out my delays.”

This article is from VG Signal Chain issue #1. All copyrights are by Vintage Guitar magazine. Unauthorized replication or use is strictly prohibited.