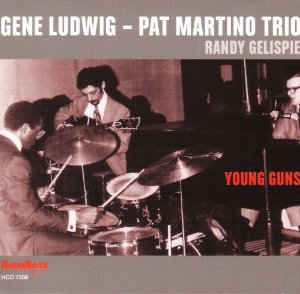 With four solo albums under his belt, Pat Martino was considered one of the ’60s most exciting new jazz guitar voices. As the decade ended, the 23-year-old was a third of an organ trio led by 30-year-old B-3 virtuoso Gene Ludwig. Tapes capturing their onstage ﬁreworks at Club 118 in Louisville, Kentucky, in 1968/’69 remained in Martino’s personal stash until cleaned up and now released.

A 13-minute-plus “Who Can I Turn To” kicks off the set with easygoing soloing from both before Martino goes full-throttle on John Coltrane’s “Mr. PC,” unleashing waves of dazzling, incandescent, single-note passages. Wes Montgomery’s inﬂuence looms large on “Sam Sack,” a 1961 tune Milt Jackson and Montgomery recorded, and “Close Your Eyes,” a song Martino had only recently recorded on his 1968 East album.

The album also proves a worthy showcase for the bebop-minded Ludwig, active until his death in 2010. Young Guns captures the interplay of two future jazz masters in their youth, both loose, swinging, and hell-bent for leather.