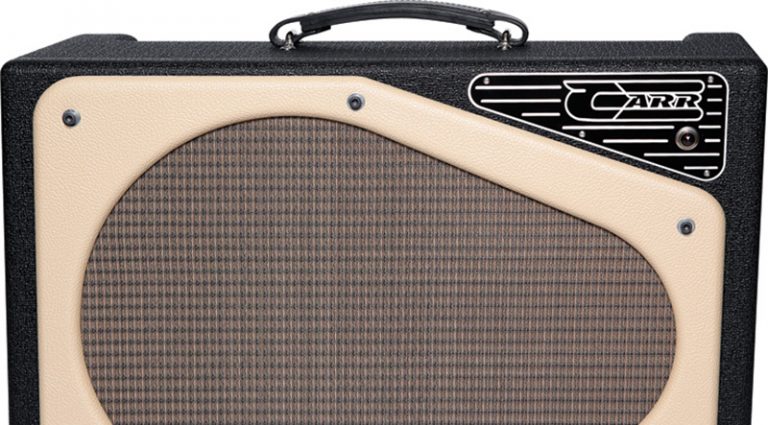 From early models such as the Carr Slant 6V and the Rambler to more recent offerings such as the Artemus and Sportsman, North Carolina-based builder Steve Carr creates impressive tube designs that are never mere copies from the past. His latest circuit is the Bloke, which is his take on the high wattage tone offered by ’70s stacks, but with hints of bass gear like the Ampeg SVT thrown in. Furthermore, Carr has produced this class of tone in a gig-friendly 1×12 combo that’s rated at 48 watts.

The Bloke has controls for Drive, Levels for the Normal and Lead channels, Treble, Middle, and Bass. Top-mounted switches control medium/high gain, normal/lead (foot switchable), standby/play and on/off. The preamp circuit contains three 12AX7 tubes and a 12AT7 driver, while the power section can either use a pair of EL34 tubes for 48 watts, or two 6V6s for 23 watts (amp must be re-biased and impedance adjusted). Rectification is solid state, and there are dual speaker outputs, along with a 4/8/16 impedance selector switch.

The amp’s Elsinore speaker is made by Eminence to Carr’s specs, using a Brit-style cone, along with a US-style magnet and spider to give the unit more mids, tighter bass, and extended, yet controlled high-end. The Bloke’s cabinet features a dovetailed solid pine build with an integrated baffle. Because of the baffle design, the Bloke has an ingenious floating grill cloth, as it could not be attached in the traditional way. The control panel is top facing, while the pilot light is creatively placed on the front panel of the amp. Aesthetically, the Carr is one-of-a kind, and likewise there is little mistaking it for anything else on the market. At 47 lbs., the amp is still in the grab-and-go category, and will certainly fit in all but the tiniest of trunks. Like all Carr amps, the Bloke is constructed with classic point-to-point wiring, and is also available as either a head, or 2×12 combo. A variety of custom coverings are available for an up-charge, while additionally, the amp may also be ordered with an effects loop for an additional $400.

For testing the Bloke combo, we used a Les Paul and a Strat-style electric with Rocketfire single-coil pickups. Flipped on, the Bloke sucker-punched us with its brash, immediate tones. The amp had none of the softness or the delay associated with many of the Fender-based designs on the market. Tonally, the Bloke delivers fairly bright, tight-sounding, and punchy tones. If you have ever plugged into a ’70s Marshall, then you know of the tone we refer to. If you have not had the pleasure of plugging into one these gems, we suggest you listen to some Ziggy Stardust-era Mick Ronson or classic AC/DC to get an idea of the Bloke’s tonal pedigree.

Running the drive and level knobs at various levels, it became pretty clear that this amp is a medium- to high-gain creature. Although it can do a bit of clean, that is not the forte of this diminutive 1×12 beast and clean seekers should look elsewhere. We then hit the foot switch to shift the amp into “lead” mode. Here, the tones became more overdriven and thicker. As much as we liked the Normal channel, the Lead had us after the first note. Its tone was never compressed and notes could be easily pushed into feedback and long sustain. Switching out between the single-coil and humbucker-loaded test guitars, the amp did well with both, yet responded better with the higher output/fatter-sounding Les Paul. A boost pedal easily leveled the playing field on a single-coil guitar, however, with just a little EQ help from the stompbox. If there’s a star of the tone section, it would be the Bass control. Never boomy, the knob gave tight low-end that kept things full without flab.

While not a one-trick pony, this amp has a definite sonic signature that might not lend it to playing a Top 40 or old-timey country gig. Rahter, it’s a rock star, able to produce classic ’70s stack tones. Its tight punch and gainy tones make perfect for the player who wants to drop their ’70s Brit-style head and cab for a 1×12 combo.