Anyone who’s ever caught Ted Nugent on tour has seen this instrument, and during the Summer of 2003 it was intended to be the only guitar used by the Motor City Madman during his one-hour slot.

“That was pretty much due to time restraints,” said Dean Mitchell, who has been Nugent’s guitar tech for a number of years. “He wanted to just keep going, and didn’t want to have to stop to change guitars.”

In addition to being unique as a rock guitarist’s main instrument, the Byrdland is unique among Gibson electric guitars. Designed with the input of guitarists Billy Byrd and Hank Garland (the name is derived from their surnames), it was introduced in the mid 1950s as one of the company’s first “thinline” hollowbody models. Its 23 1/2″ scale is also unusual, being more typical of a student guitar than a professional instrument.

Standard Byrdlands were originally available with P-90 pickups, and acquired humbuckers in the late ’50s. Stock finishes were sunburst and natural, and Gibson made the model with Venetian (rounded) and Florentine (pointed) cutaways, as well as spruce or maple tops.

Da Nuge’s preferred Byrdland configuration is a spruce-top model with a Florentine cutaway, and Mitchell said that the guitarist has had the instrument since his days with the Amboy Dukes. It’s known as “Number 4” – Nugent numbers his Byrdlands sequentially, and the first three were lost in a fire that destroyed an Amboy Dukes trailer. Number 4 has been broken on more than one occasion, but has always been restored to Nugent’s sonic satisfaction.

The guitarist’s no-holds-barred playing style has necessitated the removal of the pickguard on all of his Byrdlands. Note the wear – down to the bare wood of the top – not only where a pickguard would have protected it, but also around the volume knobs.

According to Mitchell, the wear is due to a combination of Nugent’s sweat and his constant manipulation of the controls.

“He’s the only guitar player I know who constantly works his volume knobs and pickups,” Mitchell said. “He’s always turning up, turning down, turning up halfway, back and forth between each pickup.”

Modifications include an old Gretsch threaded strap button knob that serves as the cap for the toggle switch, and Mitchell avers that “…it’s easier for him to get at, and it looks cooler! We put those on all of his guitars.”

In 2003, the original Patent Applied For (P.A.F.) pickups, which had begun to “squeal,” according to Mitchell, were replaced by Gibson Burstbucker 2 models.

Battered, worn, and reinforced, Nugent’s ’62 Byrdland is as outspoken and unique as its owner, and Nugent has relied on its sound for many years. Perhaps Nugent’s affection and reliance on this instrument are best summed up by an anecdote recounted by his guitar tech.

“I was looking at the wear on it…” Mitchell recalled with a chuckle. “And I asked Ted if he wanted me to sand it down and put a little lacquer on there. He told me if I touched it, he’d shoot me. He wants it to be like Willie Nelson’s acoustic!” 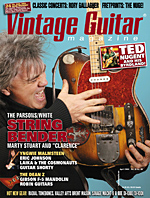 This article originally appeared in VG‘s April 2004 issue. All copyrights are by the author and Vintage Guitar magazine. Unauthorized replication or use is strictly prohibited.