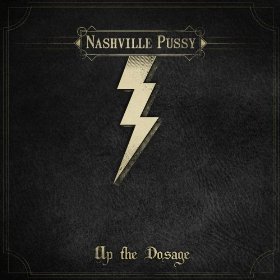 Nashville Pussy marks its territory of trailer-park Southern rock with lowbrow humor and infectious charisma. The band consists of the husband-and-wife team of Blaine Cartwright on vocals and guitar and Ruyter Suys on guitar. This salty, riff-rockin’ duo is complimented by the contributions of bassist Bonnie Buitrago and drummer Jeremy Thompson.

This is the band’s ﬁrst album in ﬁve years. They’re refreshed, buzzed, grimy, and have created an addictive juxtaposition of AC/DC, Drive-By Truckers, and Motörhead hopped up on white lightning.

Humor plays a big role in the band’s sound, but never overshadows its ability to serve up a monstrous wall of ﬁerce piss-and-vinegar rock. Amidst hard-charging riffs reminiscent of ’70s-era Ted Nugent, sound bites erupt about getting high, being 10 months pregnant, and more.

The album features 13 self-produced songs that showcase the guitar prowess of Suys. She brings a refreshingly ﬁlthy swagger and pentatonic bitchiness to such gems as “The South Is Too Fat To Rise Again,” “Before The Drugs Wear Off,” and “Pussy’s Not A Dirty Word.” Keep your eyes peeled for Ruyter Suys.

Leslie West – Blues to Die For