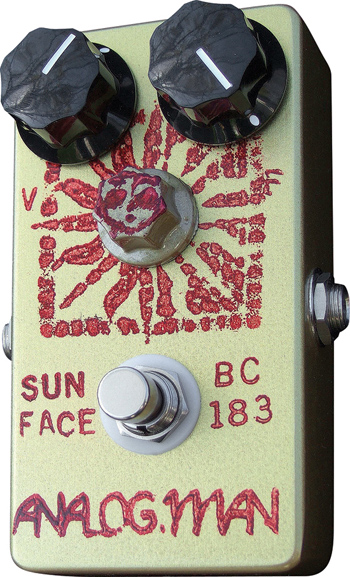 Mike Piera has been building his line of stomp boxes bearing the Analog Man name since the mid ’90s. Famous for a wide assortment of pedals with a vintage vibe, Piera boasts a customer list that includes guitar aficionados like Kenny Wayne Shepherd, Doyle Bramhall II, Carl Verheyen, Scott Henderson, and Gary Clark, Jr. His sonic thumbprint is famous throughout the guitar community, and it’s made Analog Man one of the most successful guitar effects dealers in the world.

One of Piera’s offerings, the Analog Man Sun Face, is a hand-built fuzz pedal offered with an a la carte selection of transistors, from white-dot high-gain NKT-275s to red-dot NKT-275s, BC108s, BC109s, and other germanium and silicon options. The BC183 tested here is a silicon transistor that’s brighter, fuzzier, and more stable than its germanium counterpart, and which offers a tad more gain. It’s also warm for silicon and less brittle than the BC108 or BC109. Other optional Sun Face features include a 9-volt adapter input, LED, a “Sundial” (exterior trimmer knob), and an on/off Fuzz knob that disconnects the battery, eliminating the need to unplug the input jack.

With a Volume knob, a Fuzz knob to increase gain, and an On/Off switch, the Sun Face couldn’t be any simpler to use. And in addition to featuring true bypass, solid construction, and artsy graphics, it takes up very little space. With the help of a Divided By 13 BTR 23 combo, a Budda Verbmaster combo, and a Peavey JSX 120-watt head, the Sun Face got quite a workout, with an assist from a variety of single-coil and humbucker guitars.

More Eric Johnson than Jimi Hendrix, the BC183 Sun Face elicits a smooth rumbling grittiness, turning a clean amp into a warm, woolly mammoth, reminiscent of Clapton’s “Beano” and early Cream years. A medium /high-gain fuzz, it’s sensitive to amp settings and the guitar’s volume control. When gradually turning the Sun Face’s Fuzz knob clockwise in tandem with a Les Paul, low-level amp breakup blossomed into doubled and tripled ’90s-era grungy thickness. Think Soundgarden with more hair and overtones. Even with the Fuzz knob maxed out, the guitar’s Volume knob tamed the excess for some punchy blues lines.

Analog Man’s BC183 Sun Face is a top-of-the-line pedal for the discriminating fuzz user, offering a plethora of gorgeous big rock tones in a small package.