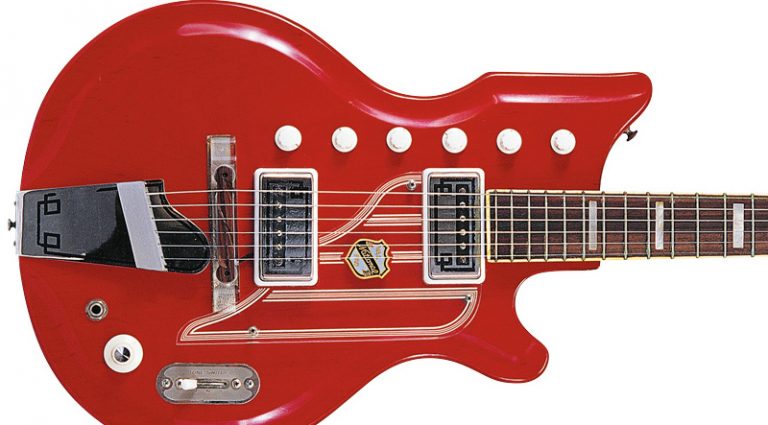 Whether Valco – the company that made National guitars in the 1950s and ’60s – was actually inspired by U.S. geography when it created its legendary “map” guitars is unknown, but they may well have simply meant to be eye-catching in the dry days before the Beatles ignited the mania for electric guitars.

Whatever the truth, because the upper bout vaguely recalls the Eastern coastline from Maine to Florida, National Glenwoods, Val-Pros, Newports, and Westwoods have been affectionately dubbed “map guitars.”

This Westwood 77 was actually one of the more conservative wooden siblings in a group of guitars that showed off National’s longstanding heritage of technological innovation. Developed in 1961 and first offered in ’62, the National map line consisted of the Glenwood 99, 98, and 95, the Val-Pro 88, 84, and 82, and the Westwood 77, 75, and 72. The numbers stood for colors and pickup layouts. The Val-Pros were renamed Newport in ’63. The coolest (though not necessarily best-sounding) were the Glenwood (VG, June ’01) and Val-Pro (later Newport), which were made from the new wonder material of the time – fiberglas. National called its version Res-O-Glas.

Basically, these bodies were made by pressing glass fiber reinforcement into a mold with two-part epoxy resin. The liquid resin components hardened around the fiber, yielding lightweight (but very strong) material that could take just about any imaginable shape, including a map-shaped guitar!

The top of the map lines (99, 88, and 77) had three pickups, including two single-coil units and another of National’s innovations, an under-bridge pickup, one of the earliest transducer pickups developed before the War. Each had its own volume and tone control plus a master volume. Unfortunately, like early Strats, you could only select one pickup at a time. The middle of the line featured one single-coil and the transducer. The lower end had just one plain pickup, although a three-way switch let you cut out either treble or bass for some nifty tones.

Fiberglass makes great canoes and awnings, but, alas it ain’t that great in a guitar, so ironically the cheaper maple Westwoods actually turned out to be better-sounding. The natty three-pickup 77 came in cherry, the 75 in a black-to-cherry sunburst, and the 72 in blond. Plainer than the fiberglas models, these still had bound fingerboards and real pearl block inlays. Tuners were Kluson Deluxes with buttons made especially for Valco, mounted on what’s known as a “Gumby” headstock. The stylish fin shapes were well in line with consumer product design tastes of the times. Lucky owners got one with a matching map-shaped hard case.

National map guitars lasted only until ’65, though fiberglas was used until the company purchased Kay and then collapsed in ’68. Some map guitars were assembled from leftover parts for the asset auction in ’69, and some apparently sported Italian hardware. National map guitars are great examples of early-’60s guitar design and, while not as prized as etched metal tri-cones, are appreciated by savvy aficionados.

This article originally appeared in VG April 2003 issue. All copyrights are by the author and Vintage Guitar magazine. Unauthorized replication or use is strictly prohibited.

Vintage Instruments and the Ban on Ivory Trade