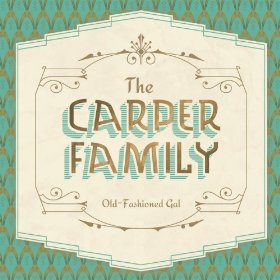 Old-fashioned gals they may well be, but the Carper Family trio injects their traditional country and bluegrass music with some tasty modern vibes on their third disc.

But this album belongs to Carper, Chrisman, and Miori. Each also has at least one show-stopping lead vocal – Carper on the romantic slow-dance “Ooh Baby” while Miori breaks your heart singing Floyd Tillman’s “I Gotta Have My Baby Back.” Miori also dispels the misbegotten notion that rhythm guitar is less important or requires less dedication than great lead playing; it’s about being a guitar player. She and Carper are the obvious reasons this band lives so deep in the groove, but Chrisman is an equal, if a more subtle one.

If the Gibson Brothers and Cherryholmes ring your bell, then this record is for you. If otherwise, the Carper Family should put you on the proper side of things as Mother Nature intended.