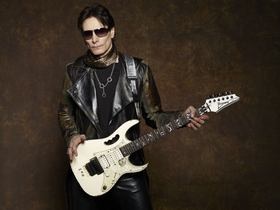 Guitarist Steve Vai is preparing a live video-broadcast performance of  “The Story Of Light Live.” The concert will happen August 25 in Los Angeles and be broadcast on AXS TV at 8 p.m. ET with an encore August 26 at 12:10 am ET. It will feature songs from his latest solo record, The Story of Light. Vai played more than 90 shows last year in support of the disc and on  October 16 will kick off another U.S. run. For more, visit vai.com.