- Advertisement -
Home Music For One Who Waits 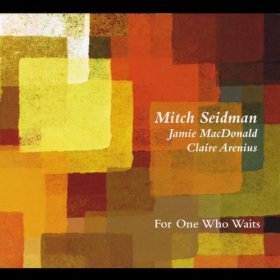 Mitch Seidman is a jazz player of impeccable taste and tone. His last record, Triangulation, used the same trio as here: Jamie McDonald on acoustic bass and Claire Arenius on drums. The three operate as one, and the liner notes indicate these eight songs were all cut in a single day, more evidence of the empathy between the trio.

Seidman’s playing is tasty, but it also can burn with intensity. His solo on “Movin’ On” is bluesy with a touch of bop. While he tinkers with the melody throughout the solo, the rhythm section is cooking. Like pretty much every song on the record, McDonald also is given ample room to solo and does a ﬁne job. Seidman’s comping behind his solos is perfect. He keeps the rhythm and harmonic structure of the song going while staying unobtrusive.

The title cut opens dramatically with the guitarist supplying some guitar work over a walking line. Seidman moves the song into a dreamy vibe and when he starts to solo, you get to see what a great player he is. He’s imaginative and never repeats himself. On the only song not written by the band, the classic “Darn That Dream,” he gets to show off his ballad chops with a lovely chordal intro before the rest of the band joins in.

If there’s one thing that can be said for both Seidman and the rest of his trio, it’s that they are patient. On the original tunes, they let things build in a way that keeps them interesting. Many times you hear records that can be a journey in and of themselves, and that’s especially true with this ﬁne guitarist.