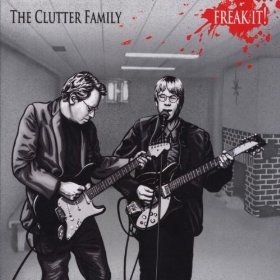 A line in Bob Dylan’s “It’s Alright Ma, I’m Only Bleeding” goes, “If my thought dreams could be seen, they’d probably put my head in a guillotine.” Lyrics to Clutter Family songs like “I Love You, Jodie Foster” make one fear a similar fate for that band’s coguitarists/singers/writers Jim Earl and Chris Hobbs.

Musically much of Freak It, is like a late Beatles-era anticipation of punk. “Brain Damaged Human Beings” has unadorned, effects-free guitars over a McCartney “White Album”-like bass line and veers to the sometimes harsh but not unwelcome tone of Lennon’s Elephant’s Memory Live In New York City period. The Clutters like their guitars to sound like guitars, and, being Byrds fanciers too, they like them on the jangly side, as on “My Cat Is Sick” or “We Don’t Want Him Around.” Like their Beatles heroes, they don’t depend heavily on solos and are such capable and creative players that what Earl and Hobbs do on “Dear Geoff,” for one, sounds like “simple” virtuosity but is more an example of their ability to mine a melody or lick idea for all its worth.

Earl and Hobbs never take the easy route. They write their deadly hilarious songs as though to make each a perennial pop standard; thus, they avoid the common “funny music” pitfall of making the song depend on the joke rather than vice versa. The music, the completeness of the songs, comes first; the humor comes naturally from the subject matter and their point of view. That they’ve got dead-on musical chops doesn’t hurt either. If the flirted with Beatles/ Monty Python collaboration had happened it might have sounded a lot like a Clutter Family album, and might even have been just as good.