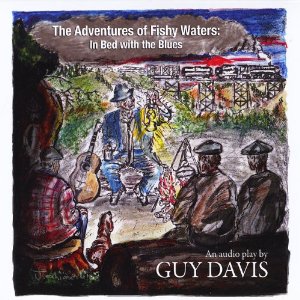 Actor and guitarist Guy Davis is all about the blues. His new two-CD set combines his talents to create an audio play, blending storytelling with music. The result is a musical odyssey of a make-believe bluesman packed with all the stellar deep blues ﬁngerpicking and slide work of which Davis is so capable.

Davis grew up in a middle-class New York suburb and jokes that the only cotton he’s ever picked is his underwear up off the ﬂoor. But he was also raised on stories from his grandparents great-grandparents of life on the railroads – and fraught interactions with the KKK. It’s this family history, as well as his own fascination with blues lore, that informs Davis’ music. As he says, “There is no tale so tall I cannot tell it, nor song so sweet I cannot sing it.”

Enter his bluesman character, Fishy Waters. Throughout, Davis sings songs and tells stories of hobo life, one-legged grave robbers, moonshine running, and the best catﬁsh stew ever. His guitar work is pure early country blues: stylish ﬁngerpicking and down-and-dirty slide that bring the songs to life. Among the standouts are “Miss Ripley’s Catﬁsh Stew,” with a bouncy ﬁngerpicked accompaniment, “Ramblin’ All Over,” which resonates with Skip James intensity, and the sweet-sounding ragtime blues of “Georgia Rag.”
Don’t run scared from the cover billing of an “audio play.” This is deep blues at its modern-day best by a man with well-honed, time-tested guitar licks.