“A spectacular model in real he-man outdoor Western finish with powerful appeal for Hill-billy and Cowboy bands.” This is how Gretsch first introduced the Rancher Jumbo – offspring of the 1940s Synchromatic models – in its 1955 catalog.

The triangular (or “French”) sound hole has been seen on most Gretsch flat-top guitars from wartime to the present day. Along with the catsseye sound holes on’40s and early-’50s archtops, it gave Gretsch an aesthetic that set it apart from Gibson, Epiphone, and other builders. A massive rosewood bridge in the shape of a grand piano also gave a different look; strings were anchored to a metal bar instead of through the top, and secured by bridge pins, like most flat-tops. This unusual bridge, as well as the triangular sound hole, was seen on the 17” model 6021 and on the mammoth 18” model 6042, which existed from wartime and into the early ’50s. 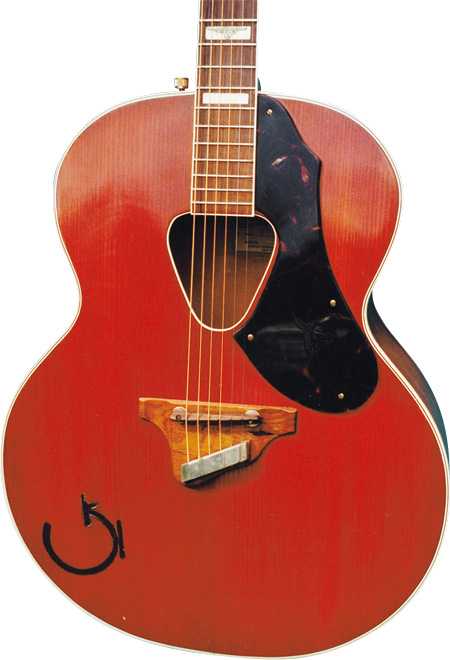 Around this time, the 18” was dropped from the Gretsch line and the 17” model (also known as the Synchromatic 125F), became the Town and Country jumbo – brother to the bold and different Rancher. Offered in natural spruce top with shaded sunburst maple back and sides, the Town and Country was a traditional jumbo flat-top except for its soundhole and bridge.

The Rancher stood apart from the Town and Country with its colos. The front of the 1955 catalog says, “Guitars For Moderns By Gretsch,” but perhaps it should have stated “The Colorful Parade of Gretsch Guitars.” The Rancher was no exception. While Martin and Gibson offered natural and sunburst finish flat-tops, the Rancher was offered in Golden Red; it and the Amber Red on the Chet Atkins 6120 are today often referred to as Western Orange.

If the color wasn’t striking enough. Gretsch replaced the Synchromatic script on the headstock with a longhorn inlay to complement the “cows and cactus” Western-motif engravings in the fingerboard’s block inlays and a “G” brand on the lower left bout. The pickgaurd was thick tortoise, with the longhorn engraving. Gretsch literature, notorious for using old photos and drawings, depicted the “Full western” Rancher in catalogs until ’63, though such Ranchers were made for only three years; by ’57, the longhorn on the headstock had been dropped in favor of a horseshoe inlay. The Western-engraved block markers were replaced with humped-block inlays, and the tortoise pickguard was replaced by Lucite. Only one Western appointment – the “G” brand – remained for another year. In ’58, when the neo-classic thumbprint inlay took over on the fingerboard, the “G” brand was gone.

When the first Ranchers were made, Elvis had not yet recorded “That’s All Right” for Sun Records and Chuck Berry had yet to enter the recording studio at Chess Records. Country and Western was the music of the era and it is evident the Rancher was pitched to that market – perfect guitar for the country front man to strum. Several artists used one, many not in hillbilly or cowboy bands; Eddie Cochran laid down some of his classic rhythm parts on one; Gene Vincent played one with a silver-dollar-size hole in its top. In the ’80s, Brian Setzer used a Rancher acoustic in the studio. And Robert Duvall won an Academy Award for his portrayal of a guitar strumming crooner in the movie Tender Mercies, in which he played a Rancher. Eric Clapton is seen with a ’60s model on the cover of Layla. Even Motley Crue’s Nikki Sixx has been photographed with a Rancher, and Billy Walker, a country-and-western cowpoke, played one at the Grand Ole Opry.

The instrument seen here was made in 1954. Its back and sides are a rust-tinged brown, darker than the top – the norm in Gretsch’s two-tone color schemes due to the way different woods absorb lacquer. The back and sides are flamed maple, while the top is straight-grained spruce.