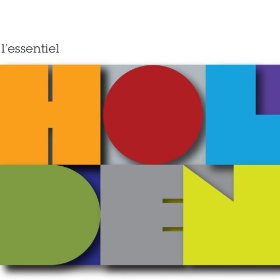 Think of Holden as the Velvet Underground with a French accent. This noise-pop duo differs, however, in chronicling not the wild side of the ’60s, but the existential estrangement of modern-day life – all set to haunting vocals and swirling guitars a la Nico and Lou Reed.

At its heart, Holden is the partnership of songwriter and vocalist Armelle Pioline and guitarist Mocke. They have been joined by a merry-go-round of other musicians filling out the full rock and roll band sound, coming together best on their 2006 CD, Chevrotine. Now, after 10 years of musical explorations and four studio albums dating back to 1998, Holden has released this two-CD set chronicling the band’s output. This is part greatest hits package, part collection of rarities, outtakes, live tracks, and demos. Packaged with lyrics and photos, it’s truly an essential addition to the band’s story.

While comparisons to the VU are apt, Holden’s voice is all its own. Rarely does the band come across as harsh as the Reed-Cale collaborations; instead, Holden has a more melodic and lyrical sound, grounded in French chanson and proto-rock yé-yé pop. Mocke’s guitar work is the perfect counterpoint to Pioline’s sensuous vocals: Alternating soothing and sweet, he can break loose into maelstroms of noise and overdriven drone that underline the band’s message.

Various Artists – Hittin’ On All Six