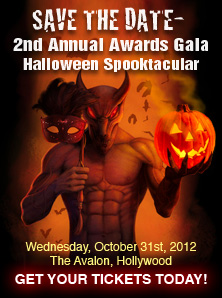 The Ronnie James Dio Stand Up and Shout Cancer Fund will host its second Awards Gala, Halloween night at the Avalon nightclub in Hollywood. The event will include a live performance by Dio Disciples, comprising former members of the band Dio, with a other prominent musicians joining them onstage for an all-star jam. This year’s honorees, who will receive awards named after Ronnie James Dio songs, include Neil Warnock, Founder and CEO of The Agency Group worldwide; Stanley J. Diamond, partner, Diamond & Wilson, and member of the Board of Directors of the Ronnie James Dio Stand Up & Shout Cancer Fund; Charlie Hernandez, President of QED Productions and veteran production manager; Bob Chiappardi, Founder and CEO of Concrete Marketing; Alex Hodges, CEO, Nederlander Concerts; Dr. Raul Mena, Director of the Roy and Patricia Disney Cancer Center; and Tony Iommi, guitarist and co-founding member of Black Sabbath and Heaven & Hell (and recent cancer survivor). Iommi has donated a Gibson Iommi SG prototype guitar to the event’s silent auction, and will autograph it for the new owner. Eddie Trunk, of VH1 Classic’s “That Metal Show,” will serve as emcee.

More information regarding the Fund, as well as tickets and sponsorships for the Gala, is available a diocancerfund.org.