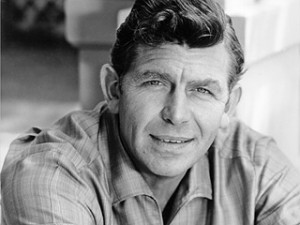 Millions of people in the ’60s were exposed to music they wouldn’t have found on the radio (bluegrass, blues, Southern folk) thanks to Andy Griffith, who died July 3 at 86.

“The Andy Griffith Show” starred Griffith as Andy Taylor, sheriff of the small town of Mayberry, much like his North Carolina hometown of Mount Airy. He was often depicted playing an acoustic guitar for relaxation, and in the show’s second season, the Kentucky Colonels (with flatpicking phenom Clarence White and brother Roland on mandolin) appeared in two episodes. Two seasons later, the Dillards (Rodney on guitar, Doug on banjo) began a recurring role as the Darling family, whose picking sessions would regularly feature Griffith’s vocals.

Prior to his TV fame, Griffith enjoyed success on Broadway and in movies. In 1959, Capitol released Andy Griffith Shouts The Blues And Old Timey Songs, featuring blues guitar legend Brownie McGhee, whom Griffith got a small part in the acclaimed 1957 film A Face In The Crowd.

In 1996, Griffith’s platinum  I Love to Tell the Story: 25 Timeless Hymns won a Grammy in the gospel category. In 2005, George W. Bush presented Griffith with the Presidential Medal of Freedom.