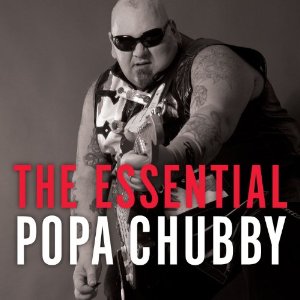 Popa Chubby is usually described as a blues guitarist, but he’s actually a damn good rock and roll guitarist. This set starts with a couple of songs that are autobiographical in nature and describe how Popa (nee Ted Horowitz) became a musician. “Daddy Played the Guitar and Mama Was a Disco Queen” and “How’d a White Boy Get the Blues” are acoustic blues that tell his tale and feature some nasty slide guitar.

His 9-11 tale “Somebody Let the Devil Out” is a swampy blues rocker. “If the Diesel Don’t Get You Then the Jet Fuel Will” is straight-ahead boogie with tasty slide. We get a live version of his hit “Sweet Goddess of Love & Beer” with an arrangement that makes it much funkier. His melodic playing continues on “Back in My Baby’s Arms,” a shuffle with a gospel feel, while a couple of covers show his versatility; “Hey Joe” gets plenty of guitar-hero attitude, and his reading of “Hallelujah” is gorgeous and soulful, both vocally and musically. All told, there are 16 cuts, and they cover a lot of ground.

He wraps things wonderfully with a rock-and-roll version of “Keep On the Sunnyside of Life” that includes a solo with considerable Chuck Berry influence.

While one could quibble about the choices taken to make up an “essential” record, this set gives all sides to a fine artist.

BuckWheat Zydeco – Lay Your Burden Down