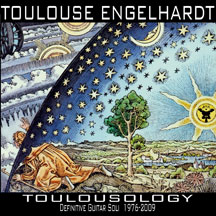 Toulouse Engelhardt  will release Toulousology on May 8. Spanning forty years of the artist’s career, the collection of seventeen milestone recordings was chosen by music critics and fans and re-mastered from the original recordings dating back from 1976 to 2009. The results capture his finest moments in the studio and in “live” performance.

Engelhardt has earned accolades from critics of the guitar and the public alike for his guitar stylings and colorful, cinematic melodies. He was the last original member of the so-called “Takoma Seven,” the celebrated innovators of finger-style guitar that recorded for Takoma Records from 1965 to 1976 and included John Fahey and Leo Kottke.